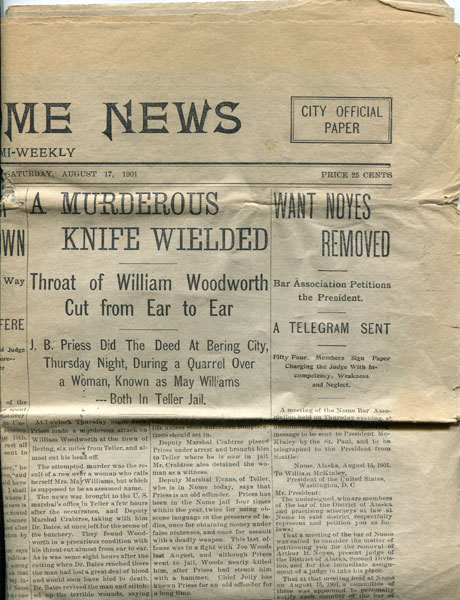 Other works by ALASKA NEWS THE NOME

First edition. 15" x 22" newsprint, 4 pp., printed in six columns. The newspaper is printed semi-weekly and this issue is dated August 17, 1901. This newspaper is quite content-rich compared to most small papers of the era, with considerable space devoted to original, local news content. Problems of violence and frontier justice dominate this issue. A large headline on the front page blares "A Murderous Knife Wielded" and describes a fight over a woman in which one man's head was nearly severed. Another lengthy story reports that a gang of 65 masked men attacked a camp on Glacier Creek at three o'clock in the morning--leading to thirteen arrests and one man hospitalized with a gunshot would--all the result of a disputed mining claim (the history of the dispute is recounted in the article). A separate editorial reacts to these events with a call for martial law at the camp, concluding "A man may kill another in the heat of passion for principle and be justified, but the man who deliberately plans to jeopardize life for gold over which there is a clouded title is a murder to all intents and purposes and deserves the fate of a murderer." Another article reports that Judge James Wickersham spent a day in Nome on his way to Unalaska, where he will preside over two murder trials, and that he is concerned about finding enough competent jurors. And yet another reports that 54 members of the Nome Bar Association have sent a signed petition to President McKinley requesting that he remove District Judge Arthur H. Noyes on the grounds that he "is vacillating and dilatory, weak and partial, negligent, careless, and absolutely incompetent" and that "the interposition of a fearless, honest, and competent judge is urgently required at Nome to prevent further riot and bloodshed, to preserve law and order, and to protect life, liberty, and property." The story of yet another murder (also gold-related) appears on the paper's last page, where we also find the usual classified and display advertising. Several creases from folding and a small area of loss at the center shaped like a small triangle that affects all pages and measures 1/2" x 1/2" x 1." Good, clean copy.

Faithful Unto Death, The James-Younger Raid On The …
JOHN J. KOBLAS