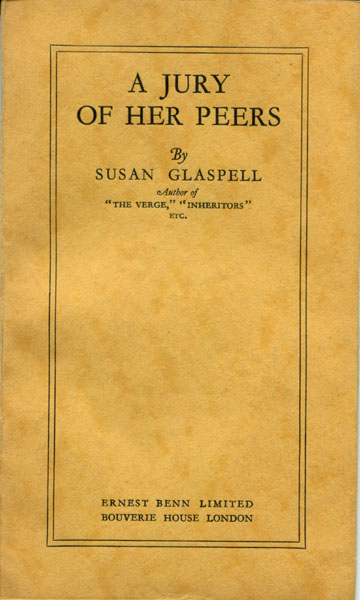 A Jury Of Her Peers.

Other works by SUSAN GLASPELL

First edition. 8vo. One of only 250 copies signed by the author. Fine copy in printed wrappers. Queen's Quorum says "... a decade before, Susan Glaspell had written a one-act play called 'Trifles,' suggested by a murder account she had read in an Iowa newspaper. After the play had become famous, Miss Glaspell recast the material into a short story and titled it A JURY OF HER PEERS. Like the play, the short story became a celebrated piece of literature. It was first printed in 'Every Week,' issue of May 5, 1917, and later reprinted by Edward J. O'Brien in his THE BEST SHORT STORIES OF 1917. The story, however, has never been included in any of Susan Glaspell's own books published in America; but what is not generally known ... and this is an important bibliographic revelation .... is that the story has had a separate book publication in England. The first edition of A JURY OF HER PEERS is one of the series of Benn's Yellow Books and 'consists of 250 copies for sale, each of which is signed by the author.' This beautifully wrought tale of murder, 'morbidly frugal in expression, but candidly naked in substance' represents pure New England Gothic ... and pure artistry." In a rural community in turn-of-the century Iowa, men search a farmer's bedroom for evidence of his murderer. Meanwhile, downstairs in the kitchen, two women choose to hide the evidence that would provide their neighbor's motive for killing her husband. QUEEN'S QUORUM 75.