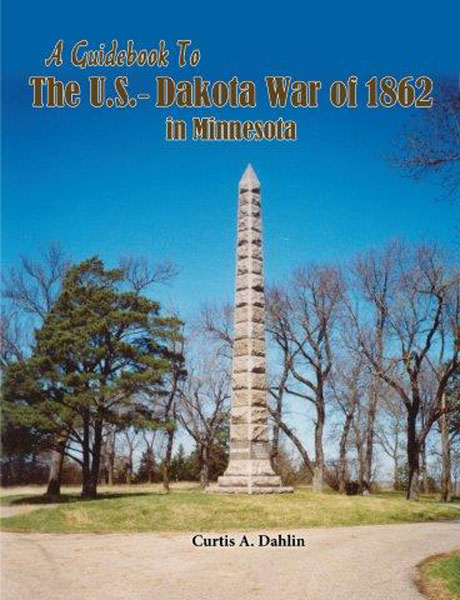 A Guidebook To The U.S. Dakota War Of 1862 In Minnesota

Other works by CURTIS DAHLIN

First edition. Pictorial wrappers. Signed by the author. 212 pp. Illustrations. Maps. "The Upper Minnesota River Valley was the epicenter of the war. Some 400 of the 650 whites who were killed by the Dakota were within three miles of the Minnesota River. Most of the 650 killed were settlers, with others being soldiers or militia. Up to 100 Dakota warriors were killed, and 38 Dakota were subsequently hanged at Mankato on December 26, 1862. The war and aftermath were the most significant and tragic events in Minnesota’s history. It was the largest clash between whites and Indians since the nation was founded in 1776. In addition, it was the largest battle for a fort (Ridgely), and the largest battle for a town (New Ulm). The New Ulm City Cemetery has more gravestones of settlers and soldiers killed by the Indians than any other cemetery in the nation." This book contains more than 250 color photographs, 31 color maps, and GPS readings and physical directions to each site. It is indexed for quick reference. As new.