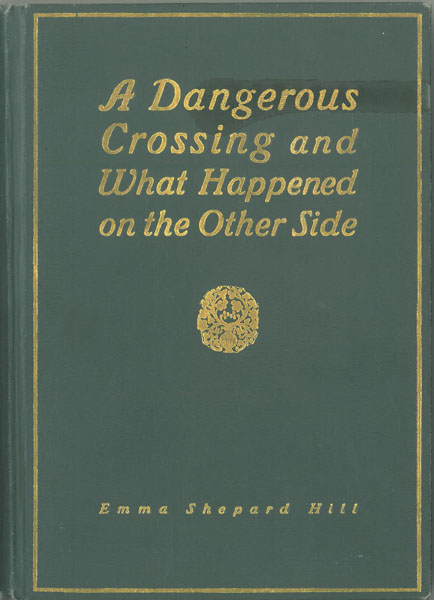 A Dangerous Crossing And What Happened On The Other Side.

Other works by EMMA SHEPARD HILL

First edition. Green cloth with title and author in gilt on front cover. 117pp. + note from author page at end. Illustrations by Jane Porter Robertson. This rare account is presented in 2 sections. The first section, "A Dangerous Crossing of the Plains Among Hostile Indians in the Summer of 1864" records the 8 week journey from St. Joe, Missouri to Empire City, Colorado Territory untaken by the family of the author when she was 13 years old. She gives a detailed account of their crossing the plains in a wagon train including the hardships encountered, Indian troubles, Fort Kearney, and the accounts of others traveling with them. The second section, "What Happened on the Other Side Being Events Recorded by the Author in an Old Diary, Begun at the Age of Fourteen and Covering a Period of Years." The authors' father moved his family to Empire City to become a Superintendent of a group of mines. She presents the second section in a series of lengthy letters spanning the period of March, 1865 to June, 1874. Her account of her family's life in the mining towns in the mountains of Colorado is detailed, entertaining, and insightful. This first edition is a rare work with only 2 copies having appeared for sale publicly, and major collections lack this first edition. Graff 1887 notes this first edition, but only had the 1924 second edition. Howes H481 only notes the second edition. Mintz 564 has the entry for this title, but apparently didn't have a copy as there is no description. A minor water stain on front cover, else a near fine, bright copy of a rare and important work.

History Of The Cattlemen Of Texas.
FARMER, DAVID [EDITOR].