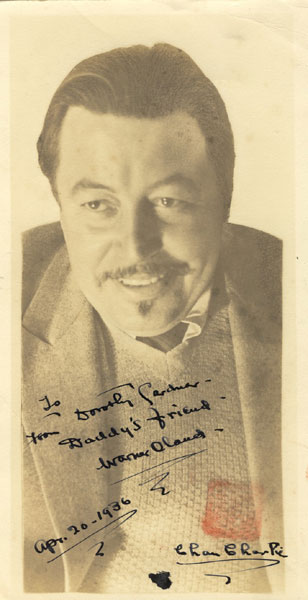 5" X 9 3/4" original photographic portrait of the actor Warner Oland inscribed by him to a friend and signed by him as "Charlie Chan." The inscription written by a vintage fountain reads "To Dorothy Gardner from Daddy's friend, Warner Oland, Apr. 20, 1936." Beneath which is Oland's red ink, slightly faded chop block and his character signature "Charlie Chan." In the photograph Oland is casually dressed in a sport coat and sweater, and smiling warmly. Warner Oland was the original Charlie Chan on the screen and portrayed the character from 1931 until 1938. Oland came to the series as a distinguished character actor and sometimes star, a status he maintained well into the Chan years. Fine copy. Rare.

Frontier Of Fear.
by Michael. Hartland

Star Of The North
by D.B. John