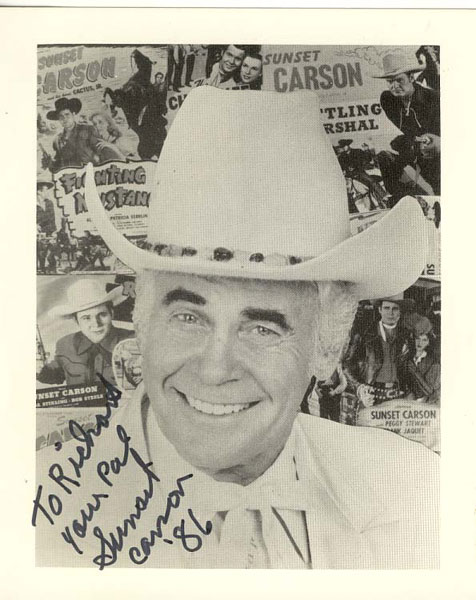 Other works by "SUNSET" PHO CARSON

Star of innumerable "B" Western movies. Fine. Portrait in ten-gallon hat, boldly inscribed, "To Richard, your pal, Sunset Carson, '86." Sunset was quite handsome, standing 6'6" tall and boasting quite a following among female audience members ... a rarity in the field of action adventures. But, unfortunately, Carson was a terrible actor. Despite his lack of acting prowess, he did look great on a horse and so, was awarded his own series by Republic Pictures. In just two years, 1945 and 1946, Sunset Carson starred in fifteen action-packed westerns plus guest starred in a Roy Rogers extravaganza. Shortly thereafter Republic fired him for allegedly for being drunk at a studio function. Sunset Carson was able to make more of an impression on western filmdom than most cowboys managed to do in their entire movie careers.

The Reaper's Line. Life And Death On The …
LEE MORGAN II