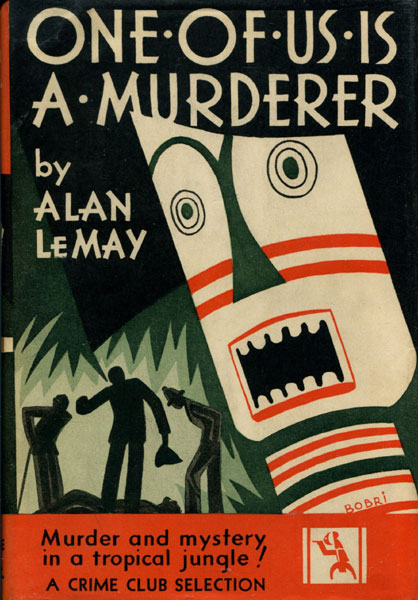 One Of Us Is A Murderer.

Other works by ALAN LE MAY

First edition. Near fine in price clipped dust jacket by Bobri [Vladimir Bobritsky], lightly sunned on the spine. Six men and two women are trapped in a tropic clearing in a South American jungle ... and one of them is a murderer! One of the members of the party is found horribly strangled by the head of an Indian doll that had been shoved down the victim's throat. Le May was a successful Western author, Hollywood screenwriter, and ultimately a producer and director. He is best known for such Western novels as THE SEARCHERS, which was made into the tour de force movie by John Ford that starred John Wayne. Other novels include USELESS COWBOY, CATTLE KINGDOM, THE UNFORGIVEN, and many more. This Crime Club title is his only mystery novel. Sharp copy.

No Flowers For A Clown
STANLEY NOYES