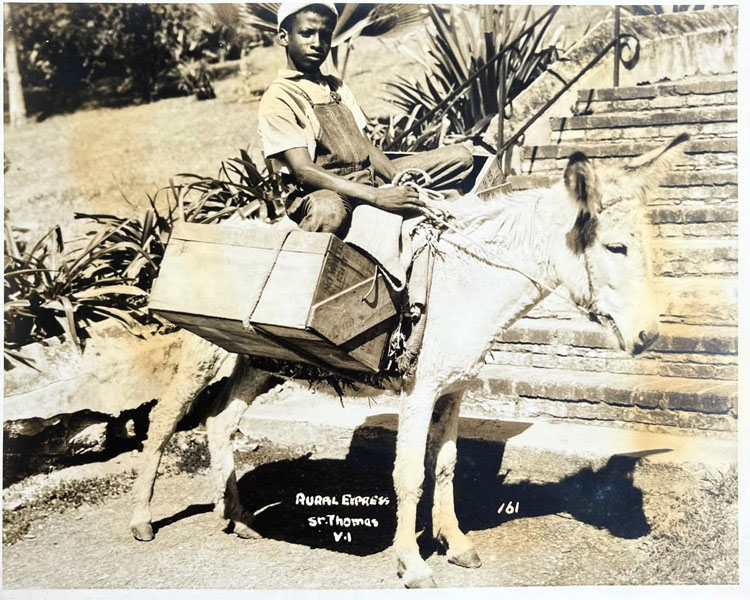 Other works by MATHEWS, ROBERT SMITH (PHOTOGRAPHER) & RICHARD B. MATHEWS

13 1/4" x 11" album in blue-ribbed cloth binder. Title in gilt on front cover along with brass screw posts at gutter margin. [48] leaves with 9 printed captions for various stops and 32 large sepia-tinted silver gelatin photographs, sized 8" x 10" tipped-in and with nearly all photos with identifying text and negative numbers at lower fore-edge within the negative. Promotional souvenir album for the SS Statendam of the Holland America line with stops in Cuba, Virgin Islands, Martinique, Trinidad, Venezuela, Curacao, Cartagena, Colombia, the Panama Canal and Jamaica. This album documents a 1937 cruise through the West Indies by the SS Statendam and includes well-composed photographs by a Holland America Line photographer, and printed chapter captions by his brother vividly detailing the attractions of each stop. Opening with a shot of the SS Statendam with tenders carrying passengers, the following photographs include Morro Castle, the Presidents Palace, and LaPlaya Beach in Havana, with a view of the "Tropical Sunset." Other images include a young Afro-Caribbean boy astride his donkey in the Virgin Islands; Mt. Pelee and the Market at St. Pierre in Martinique; an excellent photo of woman carrying water and windmill in Barbados; an Indian family in Trinidad; the rugged landscape of Venezuela including shots of LaGuayra and Caracas; sailing ships and shopping in Curacao; followed by images of Jamaica, the Panama Canal, and Cartagena, Colombia. The SS Statendam was built by Harland and Wolff in Belfast, replacing the second SS Statendam sunk during World War I. She sailed regularly from 1929 until 1940 when she was called back to the Netherlands as World War II threatened, and sunk May 11, 1940 during the Nazi German invasion. Robert Mathews (1903-1972), was a longtime photographer for Holland America, and often worked with SS Statendam steadily from 1930-1939, appearing frequently in customs & border ledgers. His images graced many of their brochures, souvenir albums, and advertising literature. His older brother Richard Mathews (b. 1901) traveled extensively, and although based out of New York, appears to have primarily resided aboard ship. Their family originated in Toronto, Ontario, Canada, but they lived frequently in both Buffalo, and New York, and their young brother John Mathews was an editor for the Detroit Free Press in Michigan. Some scuffing and bumping to corners along with minor edgewear, rubbing, minor offsetting from old adhesive in mounted photographs. Very good. A wonderful collection of photographs.

Tombstone: Who, What, When, Where
RITA ACKERMAN