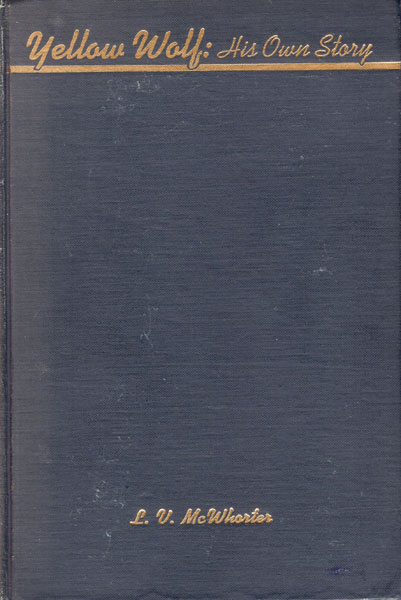 Yellow Wolf: His Own Story.

First edition. 8vo. Cloth, map on front and rear endpapers, 324 pp., numerous illustrations from original photographs, frontispiece, acknowledgments, introduction, appendices. bibliography, glossary. Index. Yellow Wolf, a participant in the Nez Perce War of 1878, died in 1935. He had told his life's story to his friend, Lucullus McWhorter, who carefully documented the events that Yellow Wolf related. He told of each battle and the hardships endured by the Nez Perce as they fled from the U.S. Army. Together, McWhorter and Yellow Wolf visited locations known to scholars of the Nez Perce War. This work is the result of 5 years of organizing the many recollections that Yellow Wolf shared, and additional notes gathered by McWhorter. An important record of the Indian side of the famous flight of Chief Joseph and his band of Nez Perce Indians. Affixed to the inside portion of the rear fly leaf is the rear cover portion of the original dust jacket. Lightly sunned and rubbed on the spine else a very good, tight, square copy, housed in a cloth slip case.

In Pursuit Of The Golden Dream, Reminiscences Of …
by Howard C. Gardiner