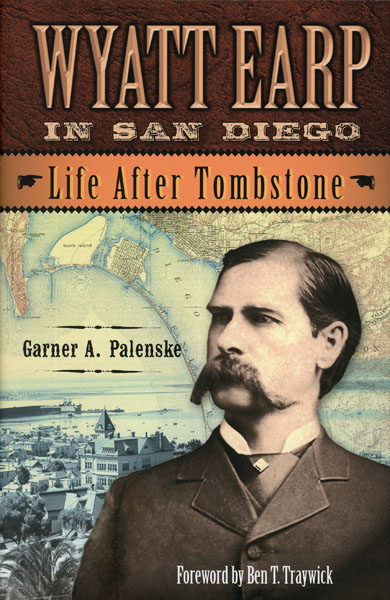 Other works by GARNER A. PALENSKE

First edition. 8vo. Signed by the author on the half title page. Brown cloth, titles stamped in gold gilt on the spine, front endpapers are a photographic reproduction of old San Diego, xix [1], 204 pp., acknowledgments, preface, foreword, illustrated, portraits, plates, appendices, bibliography, index. Foreword by Ben T. Traywick. A tale that has never been told before about Wyatt Earp and his time in San Diego, which began four years after the events in Tombstone and the O.K. Corral gun battle. While living in San Diego, Wyatt, no longer a lawman, concentrated on making money, legally and illegally. The pro-gambling faction had control in San Diego, and according to the author, “Wyatt was one of the main power brokers, because he held a strong influence over the law enforcement and executive branches of city government.” San Diego Mayor was a good friend of Wyatt’s and Wyatt’s relationship with City Marshal Joseph Coyne “resulted in the unofficial rule that police were not to enter saloons, except to address issues unrelated to gambling.” Wyatt ran several gambling houses and while making money in San Diego he was able to do so without shooting anyone or being shot at. As new, unread copy in dust jacket.

Recollections Of A Missionary In The Great West
CYRUS TOWNSEND BRADY