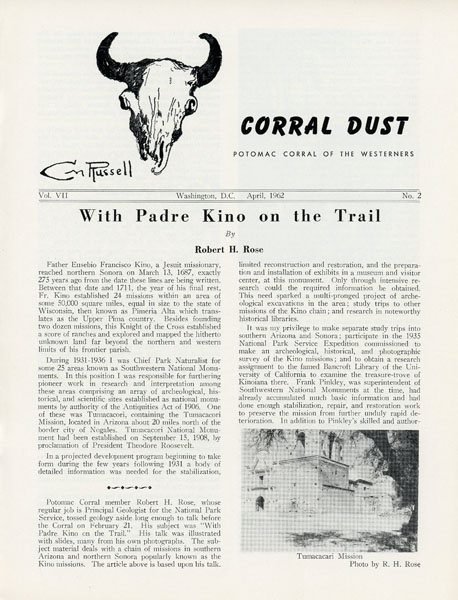 With Padre Kino On The Trail - Part I

Other works by ROBERT H ROSE

First edition. Vol. VII. No. 2. Quarto. Printed wrappers, 8 pp. Father Kino reached northern Sonora on March 13, 1687. In two parts, the story of his travels and adventures. Father Kino was a Jesuit priest from a town which is now a part of northern Italy. For the last 24 years of his life he worked in the region then known as the Pimería Alta, modern-day Sonora, in Mexico and southern Arizona in the United States. He explored the region and worked with the indigenous Native American population. Father Kino proved that Baja California was not an island by leading an overland expedition there. By the time of his death he had established 24 missions, chapels or visiting stations. Also includes "Pancho Villa Gets a Monument," by D. Harper Simms discussing how on the 46th anniversary of the only land invasion of the U.S. territory, the state of New Mexico dedicated Pancho Villa State Park, and "Frank Warner Angel, Special Agent," by Philip J. Rasch. In 1878 complaints of political corruption in the Territory of New Mexico were so numerous that the federal government assigned Special Agent to look into the matters, including investigating the killing of John H. Tunstall and into the charges which had been preferred against Frederick C. Godfrey, Agent of the Mescalero Apaches; Thomas B. Catron, United States District Attorney; Samuel B. Axtell, Governor of the Territory, and the Surveyor General. Fine copy.

They Wore No Man's Collar. Memories Of An …
JOHN ALLEN WARE