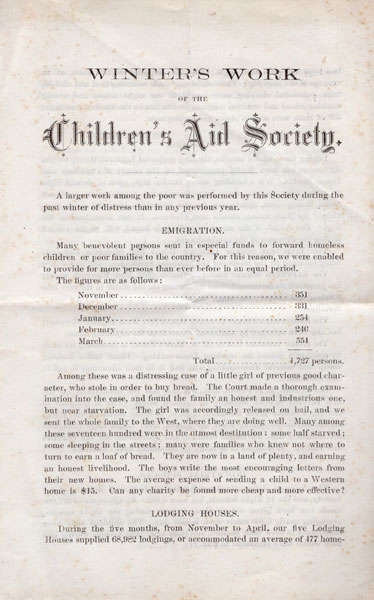 Other works by BRACE, CHARLES L.

First edition. 8 1/2" x 11" one sheet that is folded to form an 8 1/2" x 5 1/2" four page printed wrappers. The Children's Aid Society was at 19 East Fourth Street in New York. Contents include reports on Emigration; Lodging Houses; Building; Industrial Schools, Summer Retreat for Poor Children and an accounting of the Sick Children's Fund. In reference to the Orphan Trains it reads "many benevolent persons sent in especial funds to forward homeless children or poor families to the country. For this reason, we were enabled to provide for more persons than ever before in an equal period (1727 persons from November through March of 1874). Many among these seventeen hundred were in the utmost destitution: some half starved; some sleeping in the streets; many were families who knew not where to turn to earn a loaf of bread. They are now in the land of plenty, and earning an honest livelihood. The boys write the most encouraging letters from their new homes. The average expense of sending a child to a Western home is $15. Can any charity be found more cheap and more effective?" Between 1854 and 1929 the Children's Aid Society, the Children's Village and the New York Founding Hospital, all supported by wealthy donors were able to relocate 200,000 orphaned, abandoned or homeless children mostly to the mid-west. The relocation trains were called "orphan trains." A few light fold creases, else a very good copy.