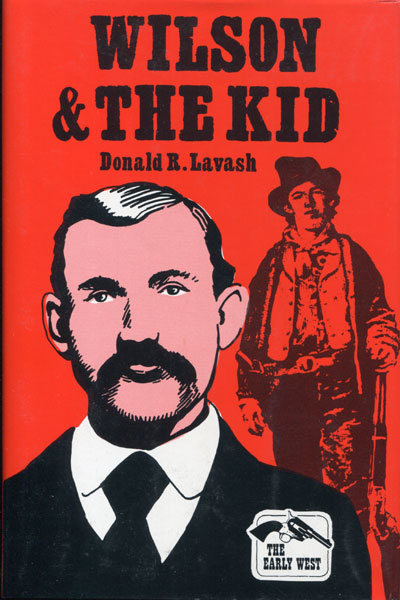 First edition. 8vo. Cloth, pictorial front and rear endpapers, 184 pp., introduction, preface, acknowledgements, illustrated, epilogue, appendix, bibliography, the author, index. Laid-in is a color map of Charlie Foor's Fort Sumner. Billy Wilson had been one of the Kid's chief lieutenants during the Lincoln County War of New Mexico, but little has been written about him. Wilson later was arrested by Federal Agents and sentenced to a prison term for counterfeiting in Lincoln. He escaped before going to prison and led a life of crime in New Mexico for another twenty years. He eventually moved to Missouri, raised a family, and became a respected citizen. In 1896, Pat Garrett helped obtain a presidential pardon for Wilson. As new, unread copy in dust jacket. Color map is also as new.

In The Shadow Of The Malpais.
by Clarence S. And Joan N. Adams. Adams

Guardian Of The Law: The Life And Times ...
by Glenn Shirley

Gunfight In Apache County, 1887. The Shootout Between ...
Neil B. Carmony [Edited By]

Lone Cowboy, My Life Story.
by Will James