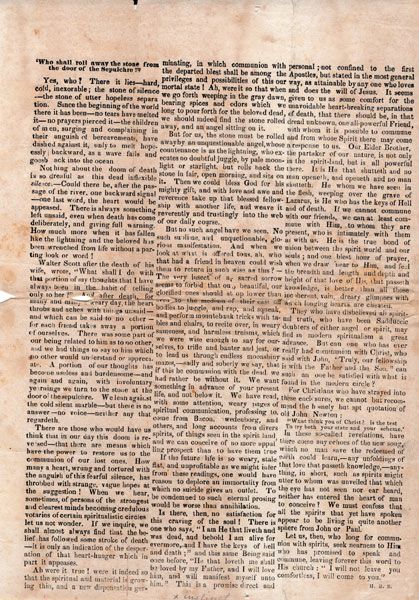 "Who Shall Roll Away The Stone From The Door Of The Sepulchre?"

Single sheet, 7.5 x 10.5 inches, with three columns of densely printed type, totaling approximately 1,350 words, signed in type "H.B.S." at the conclusion. One penciled correction of a typo. Folding creases, a few small splits, light foxing; very good. An apparently unrecorded stand-alone edition of this piece, the first appearance of which has been challenging to pin down, but may have been a letter to the editor published in The Independent in 1857 or 1858. After the death of her 18-month-old son Charley in 1848, Stowe became deeply interested in Spiritualism, seeking comfort in the idea that she might still be able to communicate with him. She approached the concept with an open mind, exploring the literature and attending seances, but ultimately concluded that what passed for communication with the dead was no more than wishful thinking and parlor tricks. Her views are clearly laid out in this essay, in which she points to the absurdity of the idea that dead loved ones would "juggle, and rap, and squeak, and perform mountebank tricks with tables and chairs" and asserts that, having read many long passages of purported communication "from Bacon, Swedenborg and others, and long accounts from diverse spirits of things seen in the spirit land" she can "conceive of no more appalling prospect than to have them true." She concludes by positioning Jesus as "the true bond of union between the spirit world and our souls," with whom one moment of loving communion "is better than all those vain, incoherent, dreary glimpses with which longing hearts are cheated."