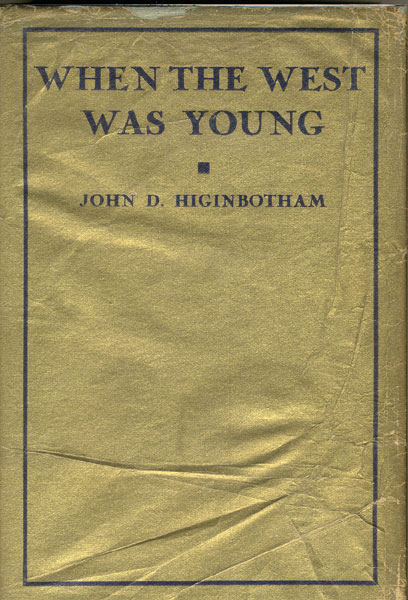 When The West Was Young. Historical Reminiscences Of The Early Canadian West

Other works by JOHN D. HIGINBOTHAM

First edition.Author's Edition. 8vo. Limited to 500 numbered copies of which this is number 192. Beautifully inscribed "To Leonard W. Brockington Esq., K.C., a small tribute on his departure from Canada, from one who spent almost half a century in "Sunny Alberta," and who has followed his brilliant career with absorbing interest. John D. Higinbotham, Guelph, Ontario, June 6, 1942." Leonard W. Brockington (1888-1966) a noted orator and lawyer emigrated to Canada from Wales in 1912 settling in Alberta, where he passed the bar in 1919 and was a Calgary solicitor for more than twenty years. In 1936 he was appointed as the 1st Chairman, Board of Governors of the CBC by the MacKenzie King government. Original green cloth, titles stamped in gold gilt on the front cover and spine, x, 328 pp., illustrated, frontispiece (portrait of the author), teg, appendix, index. An interesting history of Western Canada with much emphasis on Calgary, Macleod, Lethbridge, numerous military forts, etc., all located in Alberta. Also much on early pioneers, ranching and the cattle industry, Indians, military forts, hunting of the buffalo, and much more. Peel 3337 says "Experiences in the Macleod - Lethbridge district." Herd 1032 says "Scarce." A fine, bright, square copy in the scarce dust jacket that is chipped at the spine ends, light wear to the extremities, and some light creases to the front panel. Scarce in the elusive dust jacket.

The Great Resources, And Superior Advantages Of The …
ROWELL, HOPKINS [COMPILED BY]

Tom Tyler And George O'Brien. "The Herculeses Of …
MARIO DEMARCO

All In The Day's Riding, "Up In The …
WILL JAMES