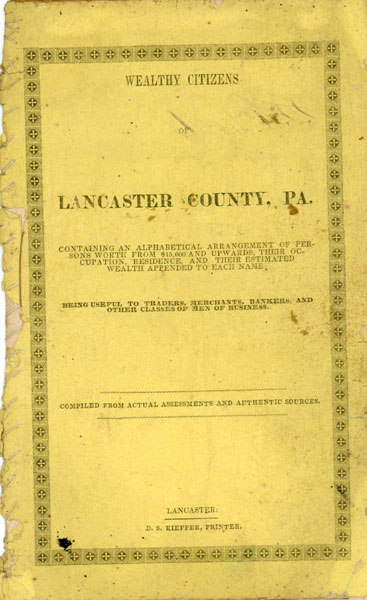 Wealthy Citizens Of Lancaster County, Pa. Containing An Alphabetical Arrangement Of Persons Worth From $15,000 And Upwards, Their Occupation, Residence, And Their Estimated Wealth Appended To Each Name. Being Useful To Traders, Merchants, Bankers, And Other Classes Of Men Of Business

First edition. 8vo. Printed yellow stitched wrappers with decorative border; 17, [7] pages plus covers. "Compiled from actual assessments and authentic sources." Short leaf of Omissions and Corrections bound in. An index of names with locations and occupations followed by financial worth. The Preface, in full: "It had been suggested to the compiler to accompany some of the names with biographical notices; arduous as such an undertaking would have proved itself, no pains should have been spared to gratify the public; but the consideration, in order to do justice to all, impartiality would have been requisite, and to have been faithful, many of the notices might have been viewed either as 'invidious or lavish,'—dissuaded the compiler to change this feature. Care has been taken not to overrate men’s wealth. Should there be any errors or omissions discovered, they will be corrected in an improved edition." We are not aware of another edition being published. Few pencil additions. OCLC locates only 4 copies of this slight, fragile pamphlet. Early owner name "Rhoads" on verso of front wrapper and on rear wrapper dated 1846; "McAllisters all Healing Ointment" in early hand in ink on the title page; lightly soiled and small nicks chips to the extremities. Very Good and scarce. Housed in a leather clamshell case with titles stamped in gilt on the front cover and spine.

A Trail Is Never Cold. The Life And …
MELTON, JR., LAWRENCE