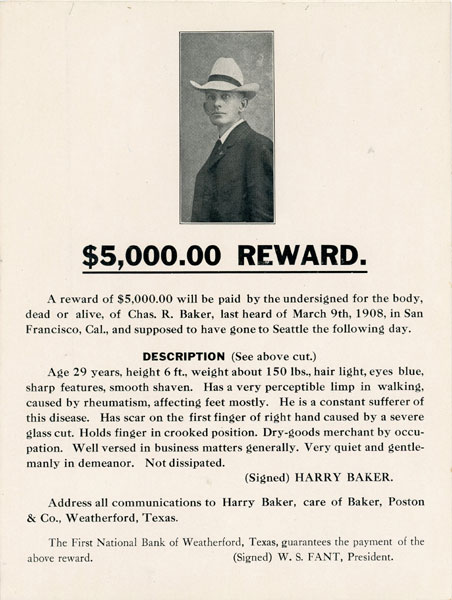 Wanted Poster "For The Body, Dead Or Alive Of Chas. R. Baker"

First edition. 11" x 8 1/4" pictorial printed broadside that offers a reward of $5,000.00 that will be paid by Harry Baker of Baker, Poston & Co., Weatherford, Texas for the body, dead or alive of Chas. R. Baker, last heard of March 9th, 1908, in San Francisco, Cal., and supposed to have gone to Seattle the following day. A picture of Chas. R. Baker is provided along with a description which states in part: "Age 29 years, height 6ft., weight about 150 lbs., hair light, eyes blue, sharp features, smooth shaven. Has a very perceptible limp in walking, caused by rheumatism, affecting feet mostly. He is a constant sufferer of this disease. Has scar on the first finger of right hand caused by a severe glass cut. Holds finger in a crooked position. Dry-goods merchant by occupation. Well-versed in business matters generally. Very quiet and gentlemanly in demeanor. Not dissipated." Further stated is "The First National Bank of Weatherford, Texas, guarantees the payment of the above reward." This actually is a poster looking to find information on the oldest son of a dry goods company with headquarters in Weatherford, Texas who mysteriously disappeared on a buying trip to San Francisco and Seattle, as per the following: "In 1908, another tragedy struck the family. A strange tale that remains unsolved to this day. Charles Baker, who grew to be an intelligent man and business wise, became a buyer for the Baker Company. In the early spring of that year he embarked on a buying trip for the stores and was last seen leaving San Francisco en route to Seattle where he was to order goods. He was never seen nor heard from again. A year later his family put out a large reward for any information that would help them find Charles. A poster was circulated all over the southwestern states in hopes that he would be located." Minor wear to the top edges, else a fine copy.

The True Southern Pacific Railroad Versus The Texas …
by Hon. John W. Johnston

Berkeley - California. A City Of Homes
The Conference Committee Of The Improvement Clubs Of Berkeley California