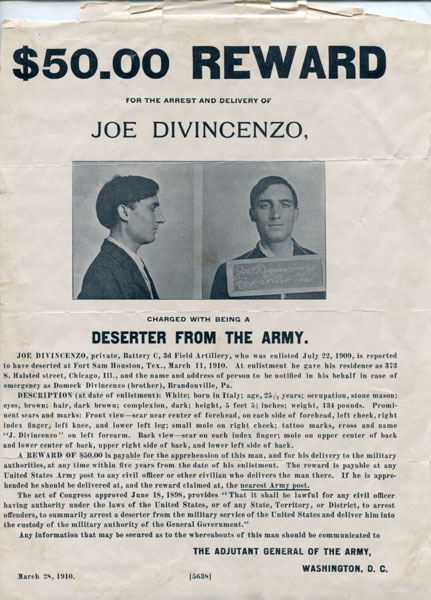 Wanted Broadside Issued By The Adjutant General Of The Army In Washington, D.C

by Adjutant General Of The Army

12" x 8 1/2" broadside offering a reward of $50 for Joe Divincenzo, private, Battery c, 3d Field Artillery, Deserter From the Army, Fort Sam Houston, Texas, March 11, 1910. Two photographs (side and front views) and a detailed description. "The act of Congress approved June 18, 188, provides 'That it shall be lawful for any civil officer having authority under the laws of the United States, or of any State, Territory, or District, to arrest offenders, to summarily arrest a deserter from the military service of the United States and deliver him into the custody of the military authority of the General Government.'" Horizontal folds and with chipping to top edge, not affecting text. Very good.

Charles Marion Russell-The Man And His Work
by F.G Renner

The Hanging Of Billy Calder
by Bill Yaeger