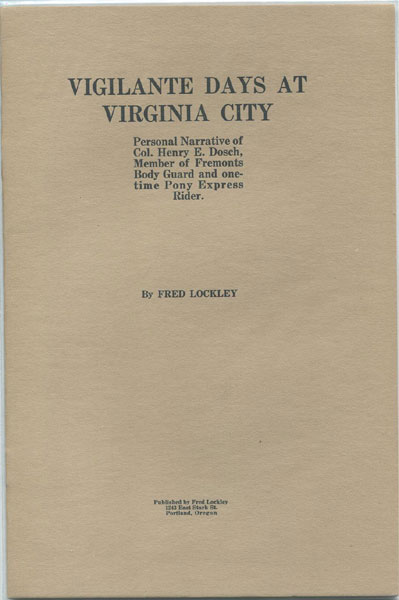 Other works by FRED LOCKLEY

First edition. 8vo. Printed wrappers, 19 pp. Born in Germany in 1841, Dosch sailed to the United States in 1860, where he secured a position as bookkeeper and was employed until after the outbreak of the Civil war. In May, 1861, he volunteered in General John C. Fremont's bodyguard (cavalry), thus serving until November 25, 1861, when the entire guard was mustered out of service after the famous fight October 25, 1861, at Springfield, Missouri, General Fremont being removed from command. He left the Army completely in 1863, crossing the plains with an ox team and walking from Omaha to Sacramento, California. He stopped for a brief period at Virginia City, where he rode the Wells Fargo Express pony on the Overland. Afterward he found employment in San Francisco, Portland, The Dalles, etc. as a bookkeeper. He later became a successful merchant, horticulturist and author in Portland, serving as the Commissioner General and Director of Exhibits for the 1905 Lewis and Clark Centennial Exposition and Oriental Fair in Portland and as Director of Exhibits for the 1909 Alaska-Yukon-Pacific Exposition in Seattle. Near fine copy.