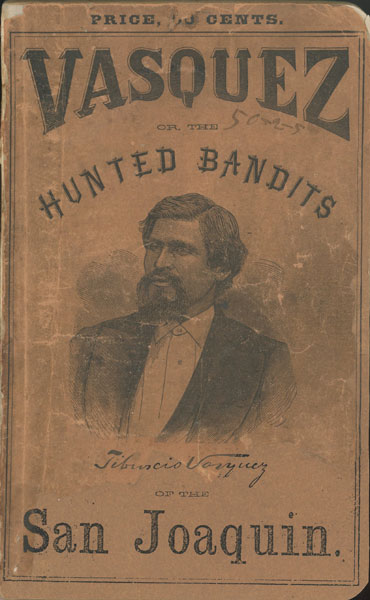 Vasquez; Or, The Hunted Bandits Of The San Joaquin. Containing Thrilling Scenes And Incidents Among The Outlaws And Desperadoes Of Southern California. With A Full And Accurate Account Of The Capture, Trial, And Execution Of The Noted Bandit

First edition. 8vo. Pictorial wrappers, 141 [3] pp., double column, illustrated. Six Guns 186 says: "Rare." "Before he wrote this book for the New York publishers, Beers, a young reporter with the San Francisco Chronicle, was with the posse that chased and captured Vasquez. Parts of his story are different from Truman's and Sawyer's and in the love themes he seems partial to fiction. Like many reporters of that day, he no doubt embellished his account here and there, but as a whole it is dependable." Bottom two inches of front wrapper is neatly replaced in facsimile by a master paper conservator, moderately foxed throughout, small nicks to the fore-edge extremities, else a very good copy of a very rare item that is housed in a clamshell case with a leather spine label and titles stamped in gilt.

Gun Notches. The Life Story Of A Cowboy-Soldier
by Captain Thomas H. As Told To Al Cohn And Joe Chisholm Rynning

The Lure Of Names.
by T.M. Pearce