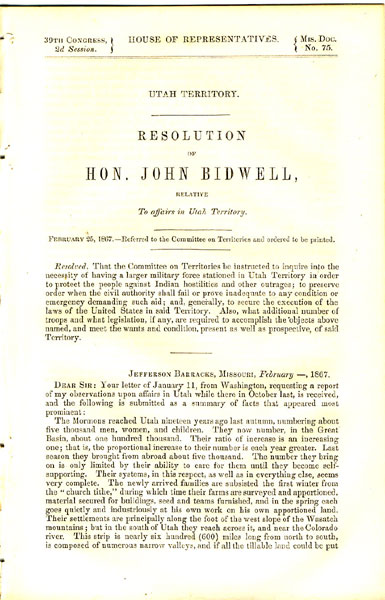 First edition. 39th Congress, 2d Session. House of Representatives. Mis. Doc. No. 75. 9" x 5 3/4" in hardcover binder, title stamped in gold gilt on the front cover, 5pp. "Resolved, That the Committee on Territories be instructed to inquire into the necessity of having a larger military force stationed in Utah Territory in order to protect the people against Indian hostilities and other outrages; to preserve order when the civil authority shall fail or prove inadequate to any condition or emergency demanding such aid; and, generally, to secure the execution of the laws of the United States in said Territory. Also, what additional number of troops and what legislation, if any, are required to accomplish the objects above named, and meet the wants and condition, present as well as prospective, of said Territory." Discusses condition of the land and its ability to be cultivated. Much on Brigham Young ... "I would call their government a theocratic despotism. Brigham Young - or as he is called there President Young - is at the head of church and state, and is the supreme and absolute ruler in everything, temporal and spiritual." Discusses the church, Mormons, the wealth of the Mormons, polygamy, the death of Doctor Robinson, etc. "No one can be in Utah long without a feeling that they are among a foreign people. It is true they speak our language, but their religion is utterly different from ours ..." Fine, bright copy.

A Cowful Of Cowboy Poetry
by Baxter Black