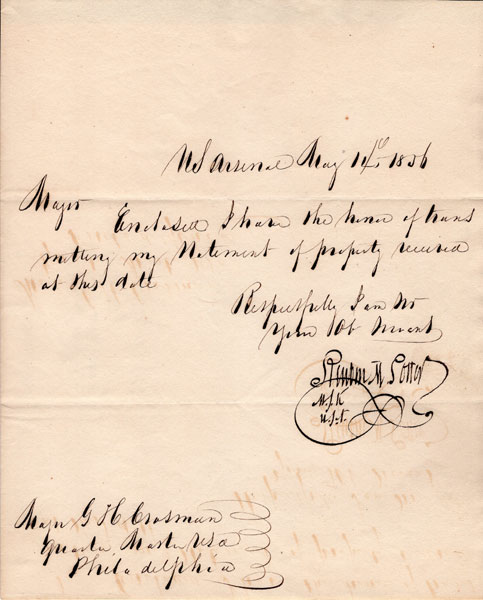 First edition. 9 7/8" x 8 1/8" sheet. Inked letter from the U. S. Arsenal located in Schulykill, New York, dated May 14, 1856 from Captain R. M. Potter to Major George H. Crosman, Chief Quartermaster at the Philadelphia Depot, concerning supplies. The letter says "Major - Enclosed I have the honor of transmitting my statement of property received at this date. Respectfully, Reuben M. Potter." Reuben Marmaduke Potter (1802-1890) was a significant figure in early Texas history. Having lived in Mexico since the 1820's, he was often used as the Texas Republic's diplomatic emissary to the Mexican Government, twice saving Texas prisoners held by Santa Ana from execution. He also wrote the "Hymn of the Alamo," the beloved Texas equivalent of the Star Spangled Banner. After serving in the Mexican-American War, Potter held Army administrative positions at New Orleans, Philadelphia, and San Antonio. His scarce letters of any date are sought by collectors of Texana. Light evidence of two folds else a very good copy.

Galveston, "The Playgrounds Of The Nation, A Descriptive …
by Unknown

A Souvenir Of Denver
by The Colorado News Company