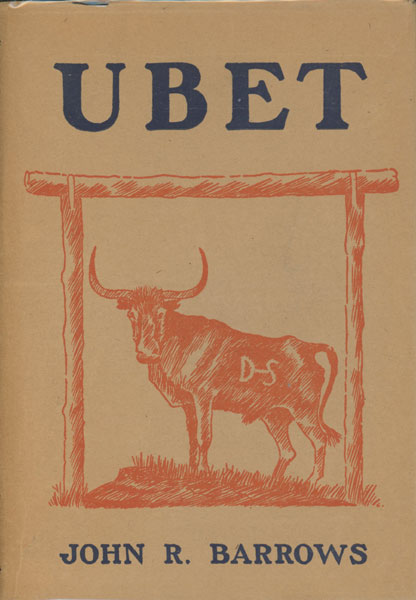 First edition. 8vo. Signed by the author on the front fly leaf with his address in San Diego, where he was an attorney there. This copy with the original owner’s name and date (Earl A. Garrettson, Christmas, 1934) on front free endpaper. Garrettson was a good friend of the author and his wife. He was born in 1880 and as of 1940 lived in Berkeley, California with his wife Marion. Laid in is a typed letter, signed to Marion Garrettson by the author's wife, Leslie Foote Barrows, on John Barrows' letterhead, and dated October 18, 1934. Leslie, among other things, mentions that Ubet was delayed by the printer and would not be out until November. Obviously, Garrettson's penned date of Christmas, 1934 makes this a very early copy off the press. The author was a cowboy for Granville Stuart and the DHS outfit. A voracious reader of dime novels, young John Barrows looked forward to blazing action as an Indian fighter or scout in Montana Territory. But when he arrived with his parents in the Musselshell Valley in 1879 he saw more sheepmen and cattlemen than Indians or Buffalo Bills. He worked in his father's trading post and soon found in the range cowboy his model of manhood. John Barrows recalls his early career as a cowboy for the DHS outfit in Ubet. Pictorial cloth, pictorial endpapers, 278 pp., illustrated. Illustrations by R.H. (Bob) Hall. Six Score 8 says, "A pioneer story which graphically illustrates the growth of the Montana ranges during the boom years of the 1880s. ...the young man worked for Granville Stuart and the D-H-S outfit as a herder and ranch hand." Howes B185 says "One of the best cowboy narratives." A very fine tight copy in the elusive dust jacket with hinges reinforced with tape on the verso, a small chip to the head of spine and a tiny nick to top edge of front cover and to the foot of spine. An exceptional copy.

Rock Island Color Pictorial, Volume I.
by Louis A. Marre