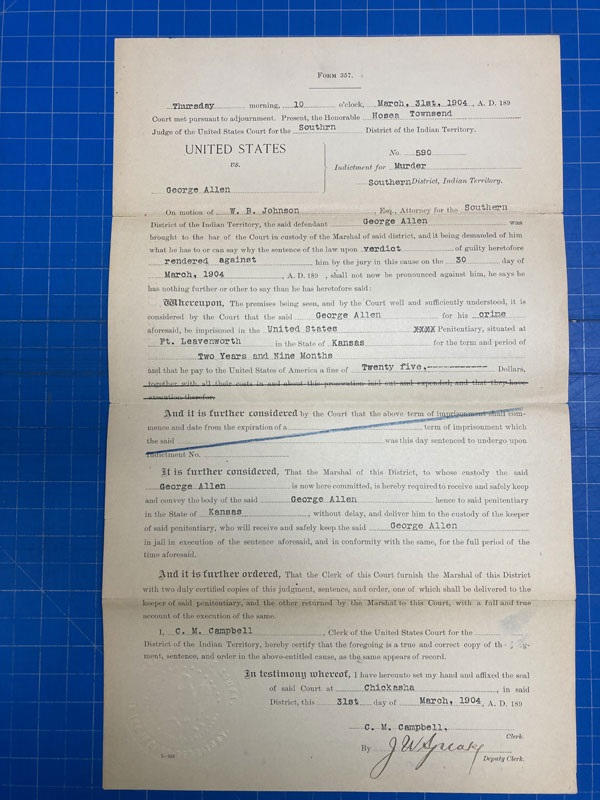 Other works by MARSHAL CHRIS MADSEN

Original 8 1/2" x 14 1/8" Penitentiary mittimus from the U. S. Southern District, Indian Territory, dated March 31, 1904, committing convicted murderer George Allen to the U. S. Penitentiary in Ft. Leavenworth for 2 years and 9 months, as well as fining him $25.00. Signed on the back in his capacity of United States Marshal "C. Madsen / Deputy" after the convict had been delivered to prison on April 2, 1904. A "mittimus" is a warrant issued by a court to physically commit someone to prison. Madsen joined the US Marshals as a Deputy Marshal with the priority of policing the vast Oklahoma Territory. William "Bill" Tilghman, Henry "Heck" Thomas, and Chris Madsen, nicknamed "The Three Guardsmen," were instrumental in bringing law and order to the Indian and Oklahoma territories in the late 1800's. Beginning in 1889, they began "cleaning up" part of what became the State of Oklahoma. Beginning in 1889 they began "cleaning up" part of what became the State of Oklahoma. Over 300 outlaws were either apprehended or killed by the guardsmen. They were largely responsible for bringing down outlaw Bill Doolin and his Doolin Dalton gang. Madsen was personally responsible for the killings of Doolin gang members Dan "Dynamite Dick" Clifton, George "Red Buck" Waightman, and Richard "Little Dick" West. Three light horizontal folds and minor wear to the extremities, else a very good copy.