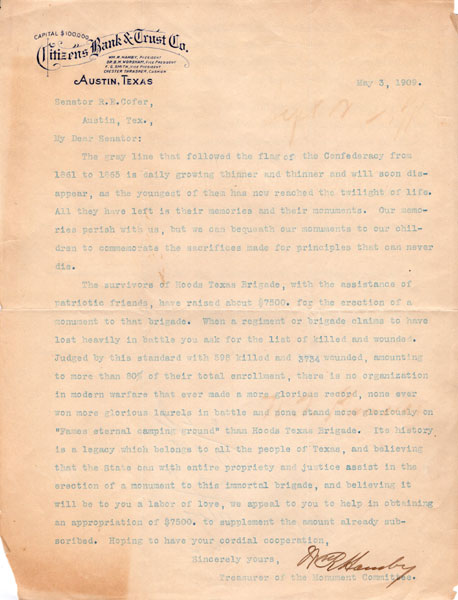 First edition. 8 1/2" x 11" typed letter on stationery of the Citizens Bank & Trust Co., of which William R. Hamby (1845-1915) is President. Besides his duties as Bank President, Hamby is also Treasurer of the Monument Committee of Hood's Texas Brigade, of which he was also a member. His committee had raised about $7500.00 for a monument to be erected to Hood's Texas Brigade and he asks Senator Cofer to obtain an appropriation for another $7500.00 and enable the monument to be erected. Hamby says in his letter: "When a regiment or brigade claims to have lost heavily in battle you ask for the list of killed and wounded. Judged by this standard with 598 killed and 3734 wounded, amounting to more than 80% of their total enrollment, there is no organization in modern warfare that ever made a more glorious record, none ever won more glorious laurels in battle and none stand more gloriously on "Fames eternal camping ground" than Hoods Texas Brigade. Its history is a legacy which belongs to all the people of Texas, and believing that the State can with entire propriety and justice assist in the erection of a monument to this immortal brigade, and believing it will be to you a labor of love, we appeal to you to help in obtaining an appropriation of $7500. to supplement the amount already subscribed." Hamby, William Robert (1845–1915). was a Confederate soldier, journalist, and legislator, was born in Paris, Tennessee, on July 24, 1845, the only child of Robert J. and Louise V. Hamby. His father died when the boy was eight years old, and Louise Hamby and her son moved to Austin, where Hamby was educated. In 1861 he enlisted as a private in Company B of the Fourth Texas Infantry, Hood's Texas Brigade, locally known as the Travis Rifles. Although only sixteen, Hamby distinguished himself in the early battles of Robert E. Lee's Army of Northern Virginia until he was wounded at the second battle of Manassas (Bull Run) on August 30, 1862. On September 30 he was detailed as a nurse and on November 4 was discharged for disability. Hamby was a president of the Hood's Brigade Association and treasurer of the committee that raised the monument to the brigade on the Capitol grounds. The letter contains excellent content concerning the monument in Austin, Texas. Letter has fold creases and light wear to the extremities.

History, Legends And Tales. Your Personal Guide To …
SAM (WRITTEN BY) LOWE

The Lost Crucifix Of Our Lady Of Guadalupe
FISHER ALSUP