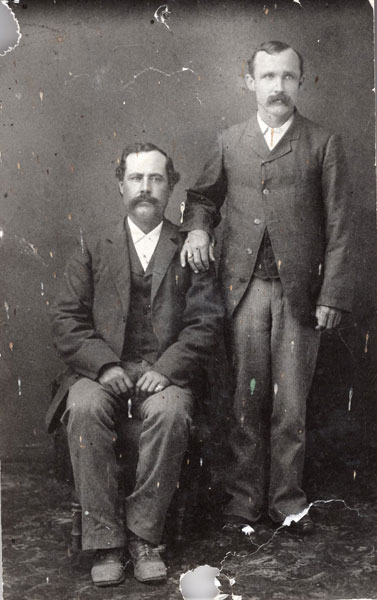 Two photographs: A). 6 1/8" x 3 7/8" photograph of Pete Maxwell and Henry Leis, and B). 6" x 9" photograph of Fort Sumner, New Mexico. Named after former New Mexico Territory military governor Edwin Vose Sumner, U.S. Fort Sumner was a military fort charged with the internment of nearby Navajo and Mescalero Apache populations from 1863 to 1868. The federal government closed the fort in 1868 and sold its buildings to Lucien Maxwell, a prominent New Mexico landowner, in 1870. In the latter 1870s Maxwell's son Pete befriended legendary outlaw Billy the Kid, and it was in his house that Billy was killed by Pat Garrett. Billy the Kid is buried in the old military cemetery in Fort Sumner, as is Lucien Maxwell. Lucien Bonaparte Maxwell was a mountain man, rancher, scout, and farmer who at one point owned more than 1,700,000 acres (6,900 km2). Along with Thomas Catron and Ted Turner, Maxwell was one of the largest private landowners in United States history. Pete Maxwell was the only son of Lucien Maxwell, who in addition to his son, also had eight daughters. The photograph of Maxwell and Leis has a small corner chip to the top left corner, a small hole punched in the bottom center and a closed tear to the bottom right corner, else a good copy. The photograph of Fort Sumner is in very good condition and has extensive notations in pencil on the verso regarding Pete Maxwell's purchase of "Old Fort Sumner."

Billy The Kid: The Bibliography Of A Legend
J.C DYKES