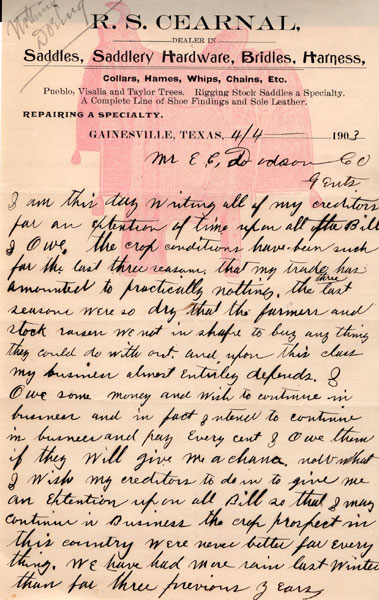 First edition. 9 1/2" x 6" two page letter written in ink on personal stationery to a Mr. E. C. Dodson Company of Dallas, Texas. R. S. Cearnal is a dealer in saddles,saddlery hardware, bridles, harness, collars, hames, whips, chains, etc. with his store in Gainesville, Texas. His letter is a plea for extended payment terms in order to stay in business and he is asking all of his creditors to be more lenient with him. He cites the poor crop conditions of the past three seasons that the farmers on which he depends for business have been unable to make any purchases from him. He strikes a more positive note toward the end of his letter and comments that crop conditions in his area have never been better for this year and if all his creditors would extend his debts further he's sure his business will prosper and his creditors would all be paid. Two things happened because of his plea: 1). written in pencil at the top his letter are the words "Nothing Doing," and 2). Mr. Cearnal apparently did not receive the requested extensions from his creditors as he was out of business within 30 days after this letter was posted. Near fine.

The West Of William H. Ashley, The International …
by Dale (Editor). Morgan

Buell's Map Of A Part Of California Showing …
by P. A. Buell