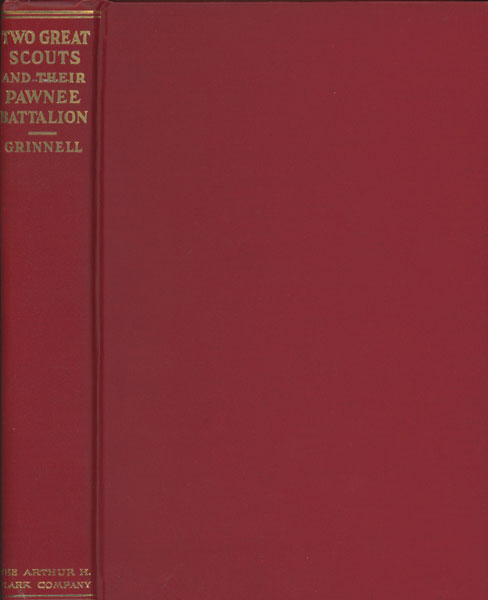 Two Great Scouts And Their Pawnee Battalion. The Experiences Of Frank J. North And Luther H. North, Pioneers In The Great West, 1856-1882, And Their Defence Of The Building Of The Union Pacific Railroad

Other works by GEORGE BIRD GRINNELL

First edition. 8vo. Red cloth, titles stamped in gilt on the spine, 299 pp., teg., frontispiece [folding map], introduction, index. The North Brothers created a band of Indian scouts which protected the surveying and construction of the Union Pacific Railroad during the plains Indians wars. According to Grinnell, "Captain North and his brother Frank North, were in the class with Bridger and Carson." AHC 114 says, "The North Brothers were two of the most important scouts in the history of the West. Based on hitherto unpublished sources, this study details their role in the building of the Union Pacific Railway, among other exploits." The Pawnee Scouts also scouted for the Connor Expedition in 1865 and along the Republican River in 1866, fought the Cheyennes at the Battle of Plum Creek, directed the Carr Expedition that led to the destruction of the Cheyenne Dog Soldier village at Summit Springs, fought in Crook's Campaign against Dull Knife in 1876-77, and assisted with the campaign following Custer's defeat. Original prospectus laid-in. Fine, bright, tight copy.

The Man In The Green Chevy.
SUSAN ROGERS COOPER

Report Of The Secretary Of War, Communicating, In …
LIEUTENANT J. W. ABERT