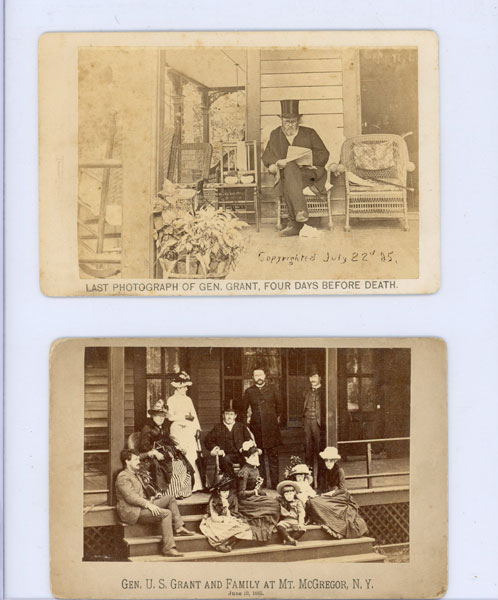 Two cabinet card albumen photos, 3.5 x 5.25 inches to 3.75 x 5.5 inches mounted on 4.25 x 6.5 inches. They are studio mounts with printed text below in blank of studio board, one with a copyright information with in negative at lower fore-edge. One with printed photographer's imprint on verso of card, The photos are the last photograph of General Grant, four days before his death and the second is that of him and his family at Mt. McGregor, N.Y. The first image shows General and President Grant seated in his favorite chair, reading a newspaper, and wearing a top hat, the day he completed his famed Memoirs of the Civil War. The top hat and the chair seen in this photo are still on display at the Grant Cottage museum. This was the last day that Ulysses Grant was taken up in a bath chair to see the view from Mr. McGregor's overlook, and would be his final time outside. Although the copyright in the image indicates the date as July 22, 1885, the image was actually shot on July 19, 1885 four days before his death. The second image was shot on June 19, 1885, three days after Grant had arrived via a special train aboard Cornelius Vanderbilt's private rail car as he raced to finish writing and editing his Memoirs. He is shown seated and flanked by Ulysses S. Grant Jr., Mrs. Julia Dent Grant, Nellie Grant Sartoris, Frederick Dent Grant, Jesse Grant and along with extended family seated below on the porch. These were both images in Gilman's Series of Grant Views, and the Grant family image is believed to be the only complete photo of the family ever taken. Gilman (1839-1895) was a longtime and active photographer in Canajoharie and Palatine Bridge, NY, and perhaps best remembered for his series of images surrounding the last weeks of Grant's life. Slight foxing and minor toning, overall in very good condition with bright images.

A Historical Sketch Of The Volunteer Fire Department …
by James M. Barney