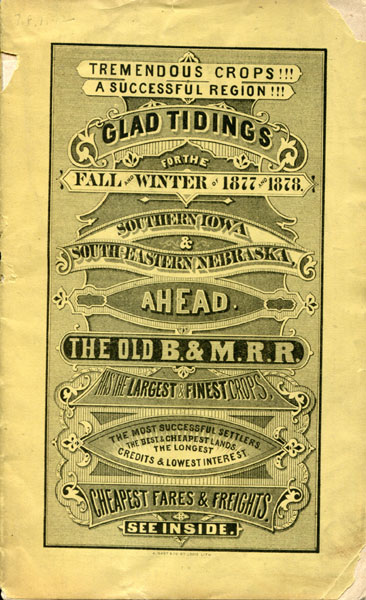 Tremendous Crops ! ! ! A Successful Region ! ! ! Glad Tidings For The Fall And Winter Of 1877 And 1878. Southern Iowa & South-Eastern Nebraska Ahead. The Old B. & M. R. R. Has The Largest & Finest Crops, The Most Successful Settlers. The Best & Cheapest Lands. The Longest Credits & Lowest Interest. Cheapest Fares & Freights. [Cover Title]

First edition. 8vo. 21.6 cm x 13.3 cm. Original printed yellow wrappers, 31 [1] pp., illustrated from two, full-page pictorial plates, three maps on verso of front cover and recto and verso of rear cover. Front map is of the great South Platte region. Map on inside rear cover is a map of Southern Iowa showing lands of the Chicago, Burlington & Quincy Railroad Company that are available for sale Map on outside of rear cover is a map showing the leading through routes to the West and the land grants in Iowa & Nebraska of the Chicago, Burlington and Quincy R. R. and Burlington & Missouri River Railroad in Nebraska. A scarce and interesting promotional for the sale of 1,000,000 acres of land owned along the routes of the Burlington and Missouri River Railroad. The Burlington and Missouri put out some of the most interesting and compelling railroad land promotionals in the genre, nicely illustrated with maps and plates, and this example is no exception. The maps show the lands for sale along the line of the railroad from Monroe, Iowa, to Omaha; lands in Nebraska from Omaha to Kearney (along the South Platte); and a map showing railroad routes from Chicago. The plates are entitled "Looking Southwest from Lincoln, Neb." and "Valley of the Big Blue South of Seward, Neb." The text is devoted to detailed descriptions of the land, including natural resources, soil, climate, stock raising and homesteading opportunities, and prices for land and for goods. This publication enjoyed some success; another promotional, issued the next year, advertised only 750,000 acres of land left for sale, indicating that the Burlington and Missouri had sold off a quarter million acres of land the previous year. Laid into this copy is a four-page "Circular of Rates on Tickets and Freight" for several railroads, including the Burlington & Missouri. Not in Railway Economics, nor in the Eberstadt or Decker catalogues. OCLC locates three copies, at the American Antiquarian Society, Harvard Business School Library, and the DeGolyer Library. There is also a copy at Yale. This scarce promotional booklet has covers lightly soiled, small chips to the covers, covers holding but loose, internally quite serviceable. Overall a very good copy.