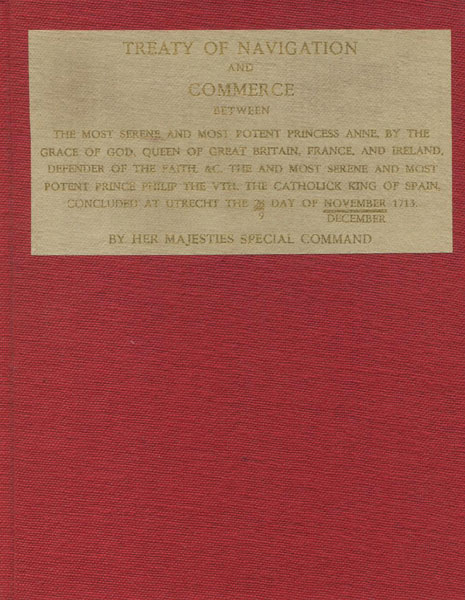 Treaty Of Navigation And Commerce Between The Most Serene And Most Potent Princess Anne, By The Grace Of God, Queen Of Great Britain, France And Ireland, Defender Of The Faith, And The Most Serene And Most Potent Prince Philip The Vth, The Catholic King Of Spain, Concluded At Utrecht The 28/9 Day Of November/December, 1713. By Her Majesties Special Command

Publication: John Baskett, Printer to the Queens moft Excellent Majefty and by the affigns of Thomas Newcomb, and Henry Hills, deceased, 1714, London

Printed wrappers, 8vo, 134pp., Rebound in red cloth with marbled endpapers and labels affixed to front cover and spine with title in gold gilt. Double-column text with Spanish on left side and English on right side of each page. Fine copy. "This commercial treaty was signed the day after the peace treaty between England and France ending the War of the Spanish Succession (Queen Anne's War). It granted England liberal trading terms on many New World products, especially reducing the duty on tobacco brought into France, which the British hoped would greatly benefit Virginia."

A Ballade Of The Scottysshe Kynge - Reproduced …
JOHN SKELTON