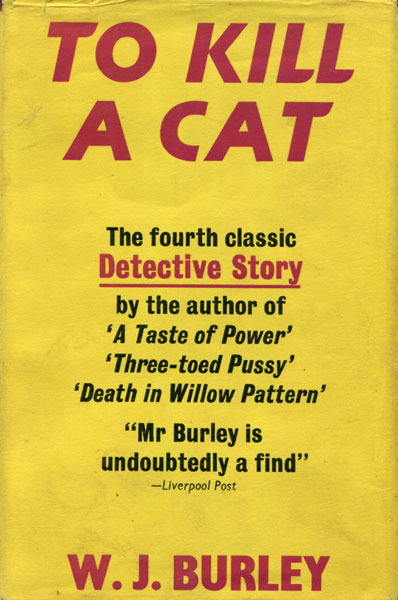 To Kill A Cat.

Other works by W.J. BURLEY

First edition. Author's fourth book, second Wycliffe. Former owner's name on front fly-leaf, else very good in lightly soiled dust jacket with light wear to head of spine. 20th Century Crime & Mystery Writers says, "In To Kill A Cat, Wycliffe is on vacation at the coast when he becomes involved in the investigation of the murder of an elegant young woman who was staying in a sleazy boarding house." The primary clues include the man in the pinstripe suit seen by the maid, the man seen on the fire-escape, the sleazy woman in the next room and what she overheard, and the clues from the bedroom itself. The murder victim was strangled, and her head was savagely battered AFTER death: perhaps two separate assailants????

Death On The Douro.
TONY ASPLER

The Burglar Who Counted The Spoons. A Bernie …
LAWRENCE BLOCK