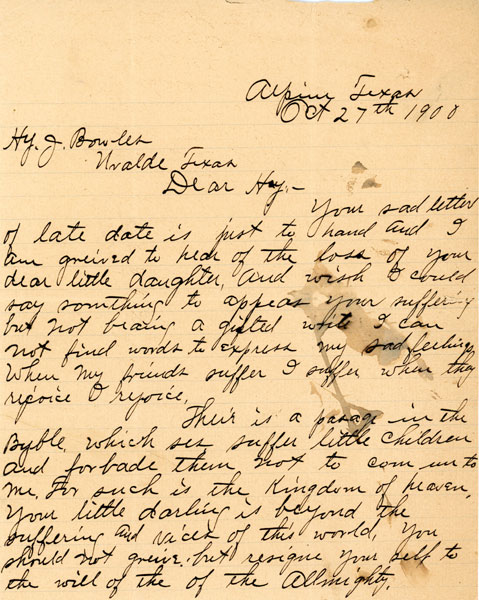 by James B. Gillett

First edition. Three-page letter written from Alpine, Texas on October 27th, 1900 and addressed to Hy J. Bowles in Uvalde, Texas. Here the famed Texas Ranger writes to a friend, offering his condolences over the loss of Bowles' daughter, and mentions the death of friend Jim Davenport. In part: “I see from the papers that Jim Davenport was killed at Cotulla on the 25th Inst. This is another of my old GH boys gone. I can’t afford to even drop a tear for him. While I always thought the killing of old man Hereford was wrong yet nobody knows that a man sometimes suffers in silence. Maybe Jim thought he was right. Thought that was the starting of making him a bad and dangerous man, peace be to his ashes. He can do no one any harm. Well I must close this rather poorly expressed letter. Again assuring you of my heartfelt sympathy. I am truly yours, J.B. Gillett.” He also comments that Bowles is buying cattle again and he advises "It is a safe business if a man can pay as he goes; but it is rather a gamble if he buys on credit at present prices for a drop of $2.00 or $3.00 on the head would upset everything." Gillett letters seldom appears on the rare book market. Fold creases and a tiny hole to top of each letter, else very good condition.

Roy Rogers And The Gopher Creek Gunman.
by Don. Middleton