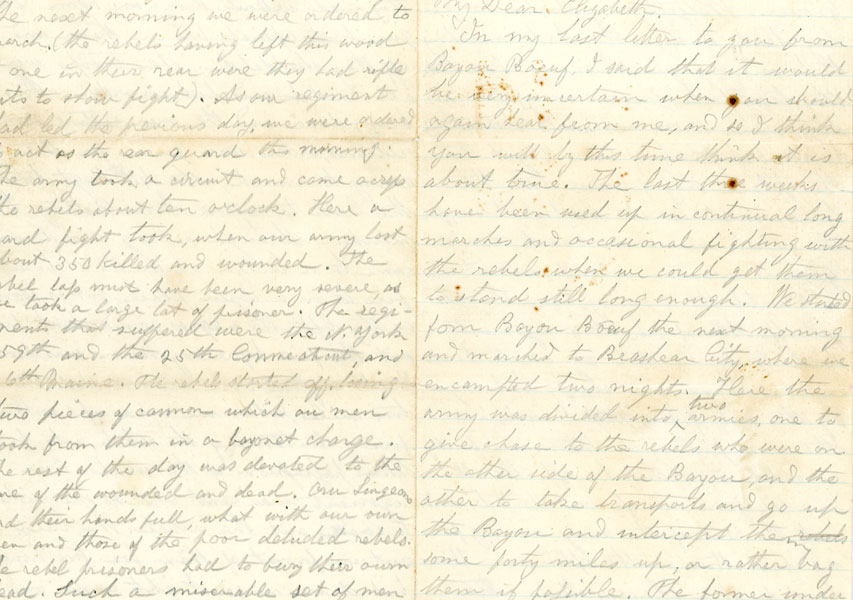 Three Civil War letters written while serving in Louisiana by Edmund Miles, a Union soldier. Edmund Miles was born in Halesworth, England, moved to Montreal, Canada, where he grew up and learned the printing trade. On 4 May 1848, he married Elizabeth Cribb and the couple moved to Cambridge, Massachusetts. In Aug. 1862, Edmund Miles enlisted in the 41st Massachusetts Infantry and shipped out to Louisiana. The 41st Infantry was changed into the 3rd Massachusetts Cavalry in June 1863, and Miles served in Company F. He fought in many battles, including the Siege of Port Hudson and the Red River Campaign. He was seriously wounded in the leg at the Battle of Cedar Creek on 19 October 1864 and spent many months in the hospital. Edmund was promoted to second lieutenant in November 1864 and was discharged on 14 July 1865. After the war, Miles returned to Cambridge and worked as a printer. The dates of the letters are April 28, 1863, May 28, 1863, and May 31, 1864. The letters contain a total of 21 pages, are in depth, comprehensive, and full of information concerning the everyday soldier in the Union Army while stationed in the South. This collection contains letters written to his wife, Elizabeth, and describe daily camp life, skirmishes, tactics, confiscation of items from Confederate houses, casualties, etc. The letters are complete, although one letter is written partially on fragments of paper sheets due, as Edmund explains, to the lack of paper. Also there is one original envelope. All contents are quite legible and in very good condition. Contents May Be Examined By Request As Several Pages Are Required!

The Youngers' Fight For Freedom. A Southern Soldier's …
by W. C. Bronaugh

Old Ranches Of The Texas Plains.
Mondel Rogers [Paintings By]

The Vaquero.
by Paul A. Rossi