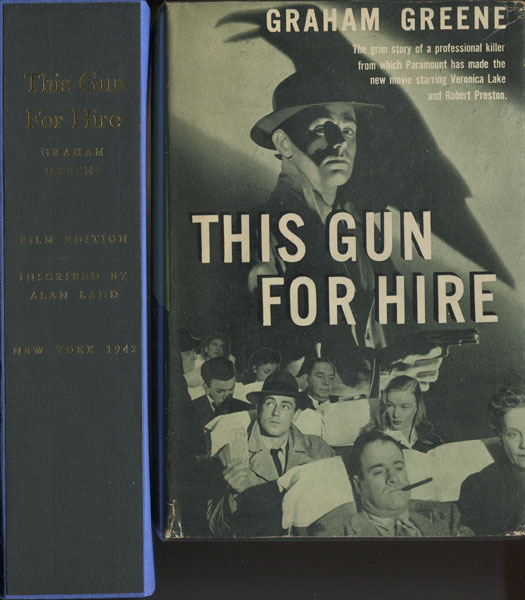 This Gun For Hire

First edition thus. Originally published in 1936. First Photoplay Edition. Octavo (19.5cm); gray cloth, with titles stamped in dark green on spine; yellow edge-staining; dust jacket; 293 pp. Inscribed by Alan Ladd to Jack Cordes on the front endpaper: "To Jack - Thank you so much for your interest - Best Regards, Alan Ladd." Text edges tanned, as usual, with a tiny tear at crown; Near Fine. Dust jacket shows a few tiny chips at spine ends, short tears along upper flap folds, and light wear to extremities; Very good+. Housed in a custom clamshell case. Basis for the 1942 film noir of the same name, with a screenplay written by Albert Maltz and W.R. Burnett, starring Alan Ladd along side Veronica Lake and Laird Cregar. This Gun For Hire was Ladd's first film appearance, and the only time he ever played a villain. He became famous as a result of the film's success, and would go on to be cast along-side Veronica Lake in The Glass Key and The Blue Dahlia. Ladd died relatively young, and books signed by him are genuinely rare.

Ask The Cards A Question.
by Marcia. Muller

Death & The Jubilee.
by David. Dickinson

The Hilliker Curse. My Pursuit Of Women.
by James. Ellroy