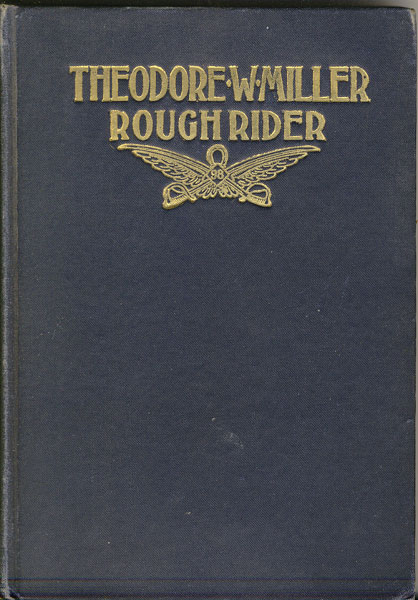 Theodore W. Miller, Rough Rider, His Diary As A Soldier Together With The Story Of His Life

First edition. 8vo. Original dark blue cloth, titles stamped in gold gilt on the front cover and spine, xii, 179 pp., frontispiece (portrait of Theodore W. Miller), preface, illustrated, top edges gilt. With the declaration of war with Spain in April 1898, 164,932 National Guardsmen entered federal service. Theodore Roosevelt conceived the idea of raising a cavalry regiment recruited from businessmen, cowboys and outdoors men. Roosevelt, a former New York National Guardsman, helped to organize the regiment and was appointed it's lieutenant colonel. Miller joined the Rough Riders in June and went with them to Santiago and was engaged in the first part of the campaign there. After training in Texas and Florida, the "Rough Riders" landed in Cuba. During the battle of San Juan Hill on July 1 the Rough Riders, under the command of Lt. Col. Roosevelt, were ordered to seize Kettle Hill. They fought their way to the top despite heavy enemy fire. Theodore Westwood Miller was shot through the lungs as he charged the hill, dying a week later in the hospital at Siboney of his wounds. He was only 23 years of age. After taking the hill, the Rough Riders continued their attack, seizing the heights overlooking the city of Santiago. Very good copy.

When The Colorado River Quit The Ocean.
ALTON DUKE

The First Cattle Ranch In Texas
THE PROGRESS, ANAHUAC, TEXAS