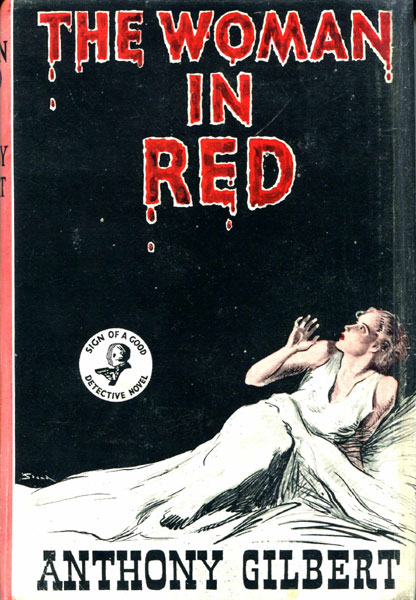 The Woman In Red.

First edition. The Dark Page says, "Anthony Gilbert was born Lucy Beatrice Malleson in 1899 and was an English author of novels and short stories. Although her mother wanted her to be a schoolteacher, Ms. Malleson succeeded in fulfilling her own ambition and became a novelist. After seeing John Willard's play, THE CAT AND THE CANARY in 1922 she became thriller-concious, and in 1927 published her first mystery as Anthony Gilbert. For many years Gilbert's true identity was kept secret and most readers assumed that the author was a man." Some color fading to top edges of the cloth, else near fine in price-clipped, lightly professionally restored dust jacket at head of spine, and lightly sunned on the spine. Julia Ross secures employment through an employment agency with a wealthy widow, Mrs. Hughes, and goes to live at her house. Two days later, she awakens in a different house in different clothes and with a new identity. She is told she is the daughter-in-law of Mrs. Hughes and has suffered a nervous breakdown. She soon learns that the son of Mrs. Hughes, has murdered his wife, disposed of her body and, with the help of his mother, plans to pass Julia off as his wife. Eventually the plans are to kill Julia and pass her death off as suicide. Columbia Pictures in 1945 issued the movie MY NAME IS JULIA ROSS, that starred Nina Foch as Julia Ross, Dame May Whitty as Mrs. Hughes, George Macready as Ralph Hughes, Roland Vamo, Anita Sharp-Bolster, and Doris LLoyd. An exceptional copy of an American film noir title. THE DARK PAGE p.110, 111.

Bone By Bone.
by Carol. O'Connell

The Case Of The Daring Decoy
by Erle Stanley Gardner

The Midnight Mail.
by Henry. Holt