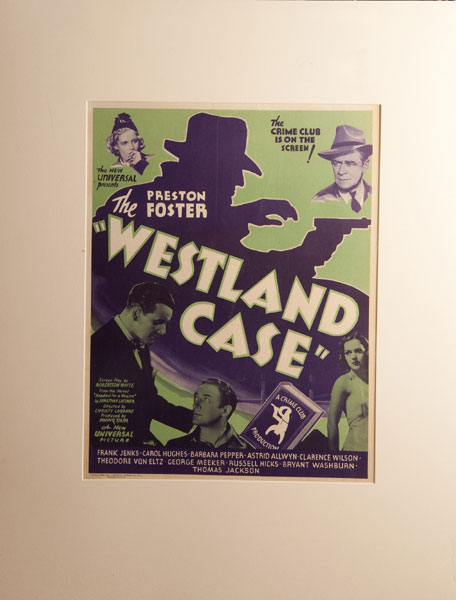 The image size is approximately 13 1/2" x 17 1/2" with the matted size being 22" x 28." The movie is from the novel HEADED FOR A HEARSE, by Jonathan Latimer and published in 1935 by Doubleday. It was published again in 1938 after the movie and titled THE WESTLAND CASE. This was the initial Bill Crane film, and has a young girl murdered in a room with all doors and windows locked from the inside. Later Crane is hired by the man accused of killing her and Crane and Doc Williams have only a few hours to prove the man innocent before he is electrocuted. Preston Foster played the role of Bill Crane while Frank Jenks was his pal, Doc Williams. The screenplay was by Robert White, and directed by Christy Cabanne. The item is suitable for framing and is in fine to very fine condition.

The D. A. Takes A Chance
by Erle Stanley. Gardner

Window Next To The Killer's House.
by Walter. Mosley

Miss Frances Baird, Detective. A Passage From Her …
by Reginald Wright. Kauffman

The Patience Of Maigret.
by Georges. Simenon