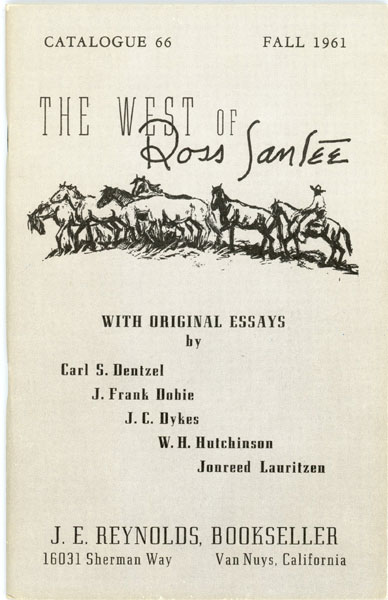 First edition. 8vo. Pictorial in black ink on gray paper, n. p. (60 pp.),acknowledgment, frontispiece (picture of Santee), illustrated with Santee drawings. This catalog lists 103 books and writings by Santee and publications in which he contributed. Individual original essays as a tribute to Ross Santee by Carl S. Dentzel, J. Frank Dobie, J. C. Dykes, W. H. Hutchinson, and Jonreed Lauritzen. The remainder of the catalog lists 370 publications about California and the West. Laid-in is a typed two-page personal letter from Santee to Fred Rosenstock dated January 8, 1963, and signed by Ross Santee. The catalog is in a mailing envelope addressed to Fred Rosenstock by Ross Santee. Catalog and letter in fine condition, the mailing envelope is in good condition. A choice item with memories of some of the great men who contributed to the writing and artistic success of the American West.

"King" Of Tumacacori. A Sketch Of The Life …
R. JOE KING

My Life And Experiences Among Our Hostile Indians. …
MAJOR-GENERAL O. O. HOWARD