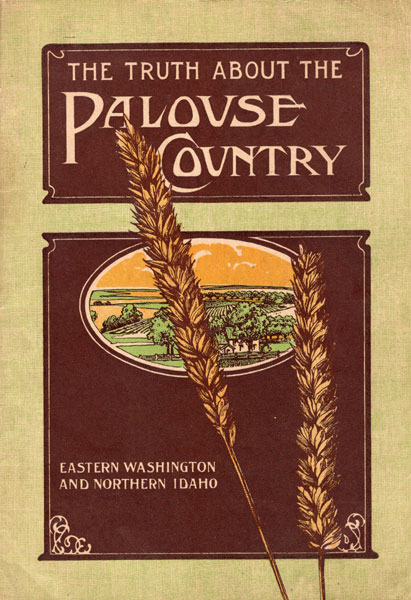 The Truth About The Palouse Country, Eastern Washington And Northern Idaho. (Cover Title)

Original stapled, color, pictorial wrappers, plus 18" x 16" folding map, stapled. 40 pp. illustrated from photographs. A promotional work published by the Spokane & Inland Empire Railroad Company, touting the agricultural productivity and amenities of western Washington and northern Idaho. There is an extensive section on Moscow, Idaho, with numerous illustrations of the schools, stores, and civic buildings, as well as the houses of leading citizens. There are similar, if smaller, sections on the towns of Colfax and Rosalia, Washington. The map is entitled "Map of the Spokane Country Published by the Spokane & Inland Empire Railroad Co." It shows the Coeur D'Alene Indian Reservation, Spokane, and an area labeled "The Largest Body of White Pine Timber in the World." OCLC locates four copies, at three institutions in Washington State, and at the University of Idaho. Light wear to the covers, else very good copy of an informative booklet with attractive pictures.