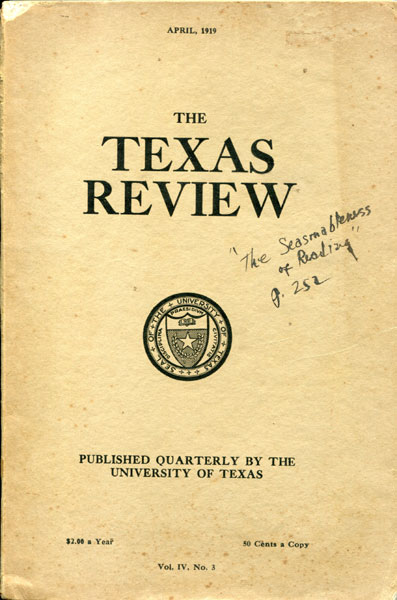 Vol. IV, No. 3. 9" x 6" in tan printed wrappers. [3]pp. 180-261. Contents. Contents include "Verses" by Karle Wilson Baker; "A Great Magician Game" by Mrs. W.S. Hendrix; "Love's Captive" by M. Clifton Andes; "Nietzsche on Democracy" by G. Watts Cunningham; "Gwendolyn and Grandcourt," by May Tomlinson; "The Mob Spirit in the United States" by J.E. Pearce; "A New Evangelist of Beauty" by Delmar Gross Cooke; "An Early Nineteenth Century Essayist" by William S. Hendrix; "Winds of Doctrine" by Percy Houston, and "The Pump Room - The Seasonableness of Reading" by J. Frank Dobie (pages 252 - 261) Wrappers soiled, lightly foxed and with wear to the extremities along with chipping and wear to the spine. Previous owner has written in pen on the front cover, "The Seasonableness of Reading" p. 252.

Prairie Farming In America. With Notes By The …
by James Caird