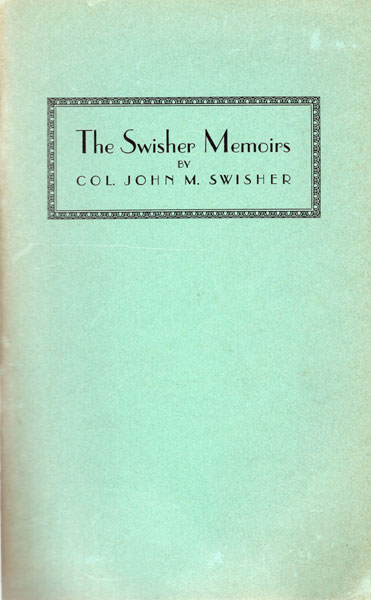 First edition. 8vo. Signed by Rena Maverick Green on the front fly leaf.. Printed wrappers, 63 [2] pp., map on inside front cover, frontispiece, introduction, illustrated, plates, portraits, map, notes. One of the most important eye witness accounts of the Texas Revolution and the Battle of San Jacinto. Also one of the most detailed accounts of Davy Crockett's days in Texas. Memoirs of one whose father was a signer of the Declaration of the Independence of Texas, and Swisher County was named after him. Capt. Swisher brought volunteers to fight with Milam in the capture of San Antonio in 1835, and was one of three to receive the surrender of General Cos. Tells of the death of Milam and how they kept it secret from the Mexicans. Spine a bit darkened, an old water stain to the bottom margin of each page, but not affecting the print, tiny corner chip to bottom edge of rear cover.

The Legacy Of Sedona Schnebly.
by Kate. Ruland-Thorne

The Presbyterian Church In Jefferson
by J. A. R. Moseley