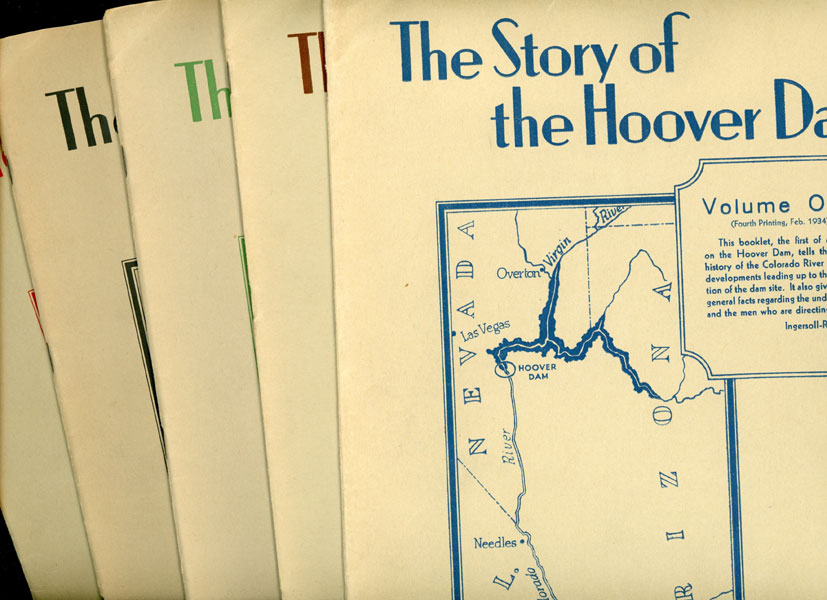 First editions except Volume I which is a third printing of the first edition. All five volumes and a complete set. All copies published in quarto as illustrated wrappers with a map on the front cover of each volume, 29, 39, 47, 47, & 23 pp., each volume illustrated from photographs and maps. All copies originally appeared in "Compressed Air Magazine" beginning in February, 1931 through and inclusive of September, 1934. Profusely illustrated promotional work from Ingersoll-Rand on the history of the construction of the Hoover Dam, Ingersoll-Rand supplied of most of the heavy machinery during construction. This set covers the history of the Colorado River and the events leading up to the beginning of construction; the development of Boulder City; the drilling of the four diversion tunnels through the walls of Black Canyon; the railroad system; the concrete and gravel operations; the Colorado Aqueduct; aerial cableways and penstocks; and how the power plant will appear when finished. Lots of nice industrial photographs illustrate the text. "This is the fifth and final volume of this series. It concludes an account of one of the greatest engineering works ever undertaken. As it goes to press, Boulder Dam is substantially finished. Six Companies Inc. have completed their contract, and their work was formally accepted by the Government on March 1, 1936. The Babcock & Wilcox Company is well along with the installation of the penstock pipes which will carry water to the turbines. A vast lake of clear water has formed behind the dam and the threat of flood has been removed from Imperial Valley. Fine progress is being made on the Metropolitan Aqueduct which will supply essential water to thirteen cities in Southern California. The transmission line to Los Angeles is almost ready. The initial generating units at the dam are being installed, and within a few months the once unruly Colorado River will have been effectively brought under man's control. In presenting this last booklet, Ingersoll-Rand Company desires to acknowledge its debt to the contractors and to the U.S. Bureau of Reclamation for their cooperation in supplying information and illustrations and in checking the manuscripts comprising the series of articles." All copies are in very good to near fine condition.

Lewis And Clark, Historic Places Associated With Their …
by Robert G. (Editor) Ferris

Ladies Of Easy Virtue In The Bitterroot Mountains
by Jay Moynahan