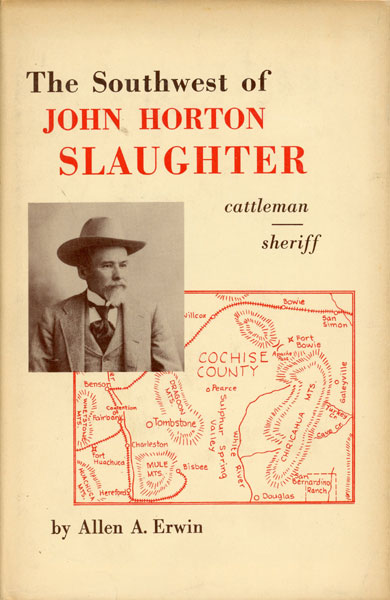 The Southwest Of John Horton Slaughter, 1841-1922. Pioneer Cattleman And Trail-Driver Of Texas, The Pecos, And Arizona And Sheriff Of Tombstone

Other works by ALLEN A. ERWIN

First edition. Cloth, 368 pp., frontispiece, numerous illustrations, folding map, bibliography, index. Forewords by William MacLeod Raine and Ramon Adams. "Slaughter was a cattleman in Texas, New Mexico, and Arizona, a Civil War soldier, Texas Ranger, Indian campaign Army scout, Arizona legislator and founder of Douglas, Arizona. He was Sheriff of Tombstone's Chochise county. ...Based on extensive research, this biography has been very well received by layman and scholar, and is becoming difficult to find."--Clark/Brunet. "It is the first, and a long-needed, book on the famous John Slaughter and shows much research. It is well annotated."--Ramon Adams. From his years in Tombstone there's much information on the OK Corral fight, as well as, the Earps, the Clantons, Doc Holliday, Clay Allison, Tom Horn, Bill Longley, and many other gunmen. Fine bright copy in dust jacket darkened on the spine and with a tiny nick to top edge of rear cover.

Brandywine Springs. The Rise And Fall Of A …
C.A. WESLAGER

Story Of The Grand Canyon Of Arizona. A …
DARTON, N.H. [GEOLOGIST]