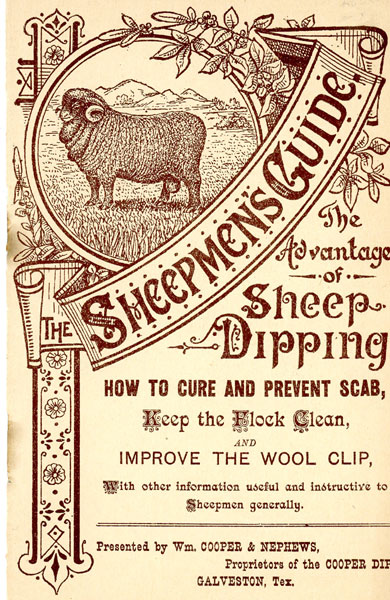 The Sheepmen's Guide. The Advantages Of Sheep Dipping, How To Cure And Prevent Scab, Keep The Flock Clean, And Improve The Wool Clip, With Other Information Useful And Instructive To Sheepmen Generally

First edition. 6 1/2" x 4" original pictorial wrappers, 31 pp., illustrated. A rare booklet advertising the chemical sheep dip products of William Cooper & Nephews, a British firm with its first American office headquartered in Galveston, Texas. Cooper's sheep dip was developed in the 1840's and the pesticide company was so successful they expanded beyond Britain's borders in 1890, opening an office in Galveston, as well as moving on to Australia, South America, and South Africa. The company remained in business through the 20th century, manufacturing other pesticides such as flea powders containing DDT. The present work dates to the beginning of the company's time in Texas. It describes the process of dipping, the dipping concoction itself, and is illustrated with a number of cuts of different varieties of sheep. OCLC locates only two copies, at SMU and the National Library of Australia. Covers detached and minor wear, else very good.

My New Home In Northern Michigan, And Other …
by Charles W Jay