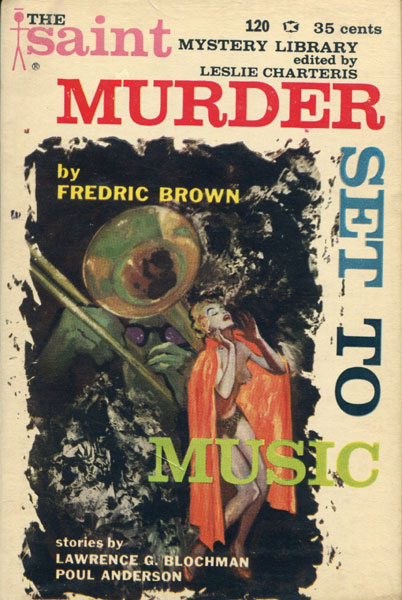 First edition. PBO. Near fine in mostly white pictorial wrappers with cover art by Art Sussman. Number 3 in Saint Mystery Library Edition. Contains MURDER SET TO MUSIC, the title story, by Fredric Brown Brown in which he presents a study in murder set against an unusual and vivid background. Also includes a story by Lawrence G. Blochman in which he introduces the reader to Finicky Flynn, a former Army cook who takes time off from running a diner to hunt a waterfront murderer. Poul Anderson writes PERISH BY THE SWORD, in which he introduces Dr. John Koskelainen. James E. Gunn's story describes the building up a million-dollar business by a man with slightly illegal organizing abilities. All of the stories included in this collection originally appeared in The Saint Detective Magazine. Collection also contains a previously unpublished story by John Jakes.

The Case Of The Running Man
by Christopher. Bush

The Case Of The Lame Canary.
by Erle Stanley. Gardner

The Night Before Murder.
by Steve. Fisher