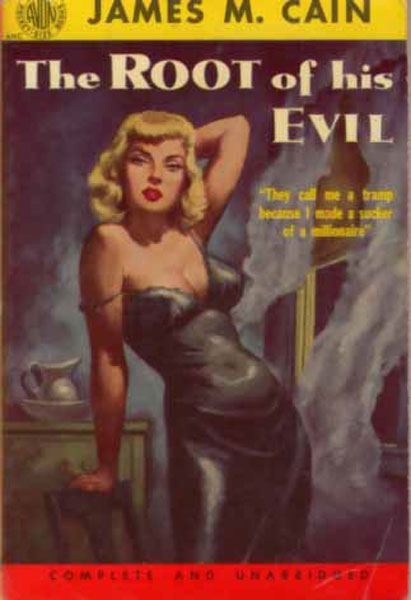 The Root Of His Evil.

First edition. "True" first edition. Paperback original. Avon 1002. Fine, unread copy of this thick [640 pp.], colorfully printed wrappers. Hoopes p. 448 says, "This is Cain's third original novel for Avon, all of which, in paperback, are rare items now." Cain wrote this story in 1937 for serial publication, using the title THE MODERN CINDERELLA but the publisher changed it to its present title. In 1938 it was made into the movie WHEN TOMORROW COMES, directed by John M. Stahl and starred Irene Dunne and Charles Boyer. Later in 1957 it was reissued using the movie title of INTERLUDE, directed by Douglas Sirk and starred June Allyson and Rossano Brazzi. This book is an anthology, and while containing Cain's novel, also provides a full-length novel by Jerome Weidman, and short stories by Ernest Hemingway, Irwin Shaw, James T. Farrell, John O'Hara, Lloyd Douglas, H. L. Mencken, William Faulkner, and Stephen Vincent Benet. THE ROOT OF HIS EVIL is about an attractive waitress and her strange love affair with a wealthy and mysterious young man. Handsome copy.

Strangle Hold. Appears In May 7th 1932issue Of …
by Erle Stanley Gardner

Simenon - A Biography.
by Pierre. Assouline

Death Of A Racehorse.
by John. Creasey