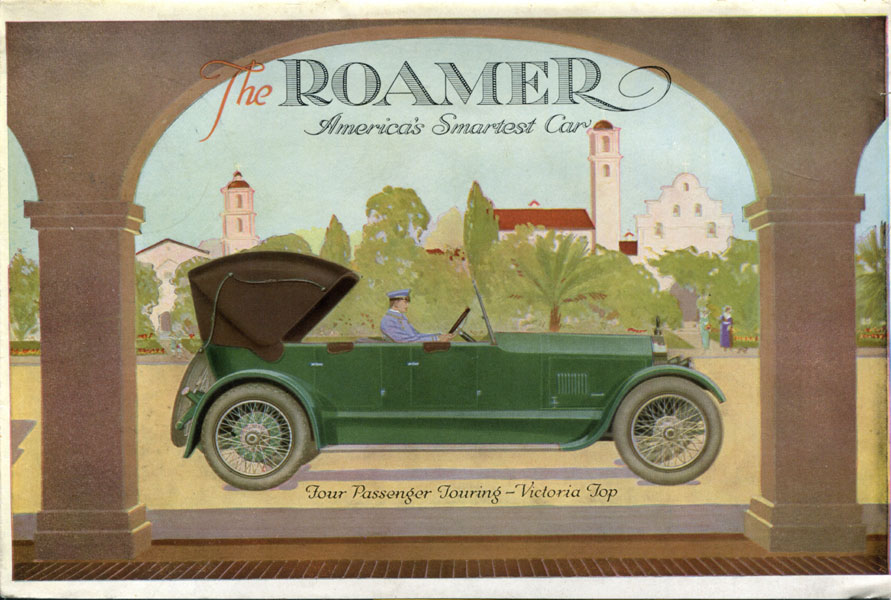 First edition. Large three fold pullout opening to a 9 panel brochure showing in color the Sport Model - Four Passenger; Touring Car - Four Passenger; Touring Car - Seven Passenger; Cabriolet - Three Passenger and Club Coupe - Five Passenger. The Roamer features of that year were Roamer Leather Upholstery; Roamer Cloth Upholstery; "a standard instrument board, conveniently arranged pedals and control leavers giving a freedom in driving readily appreciated by either lady or gentleman drivers. The front compartment and running boards are covered with heavy linoleum, while the rear compartment is carpeted; the shade of each blending well with the finish of the care and upholstery." Also pictures of the Speedster - Two Passenger and the Roadster - Two-Four Passenger. Information concerning the Roamer Duesenberg motor, Roamer spring suspension and chassis, etc. Roamer "cars have character very much like people, some are conservative and business like, some conventional and formal, but the Roamer is expressive of nothing so mush as carefree pleasure. The long low rakish lines of the body instantly suggest speed, a suggestion that is made a verity by the powerful engine." The Roamer was manufactured both in Kalamazoo, Michigan and Streator, Illinois by the Barley Motor Car Company between 1916-1929. The front cover features the Roamer four passenger Touring --- Victoria Top model. Light wear to a few fold points, else a very good copy of a scarce automobile booklet.

Little Engines And Big Men
by Gilbert A. Lathrop

Hell On The Range. A Story Of Honor, …
by Daniel Justin Herman