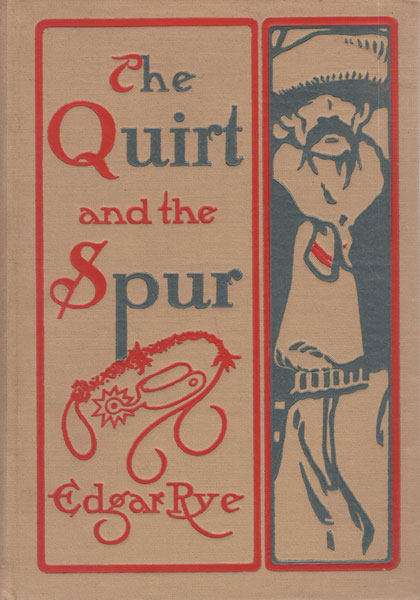 The Quirt And The Spur; Vanishing Shadows Of The Texas Frontier

First edition. 8vo. Inked inscription on the front fly leaf by the author along with a drawing of an Indian with a bow and arrow, "May this book prove interesting to A. A. Kaufhold, is the wish of the author." Original pictorial, decorated cloth, (1) 363 pp., preface, illustrated, frontispiece, [portrait], 19.9 x 14.4 cm. A well-regarded series of sketches of West Texas in the late nineteenth century, with much on Shackelford County and Fort Griffin, cattle ranching and outlaws. Six Score 95 says, "This book has become rare because a prominent ranching family felt themselves slandered by some remarks in it and destroyed all the copies they could purchase." Herd 1982 says, " Wild days of the cowboy and buffalo hunter around Fort Griffin, Texas." Six Guns 1923 says, "A history of Fort Griffin, Texas, in its wild days, containing material on the early life of John Selman and John Larn." Lightly soiled at bottom of rear cover else a fine, bright, tight copy of a book seldom found signed by the author.

Ladies Of The Lamplight
by Kay Reynolds Blair

The Fighting Marlows. Men Who Wouldn't Be Lynched.
by Glenn. Shirley

The Horse In Blackfoot Indian Culture. With Comparative …
by John C. Ewers

White City: The History Of An Early Copper …
by Clarence J. Monette