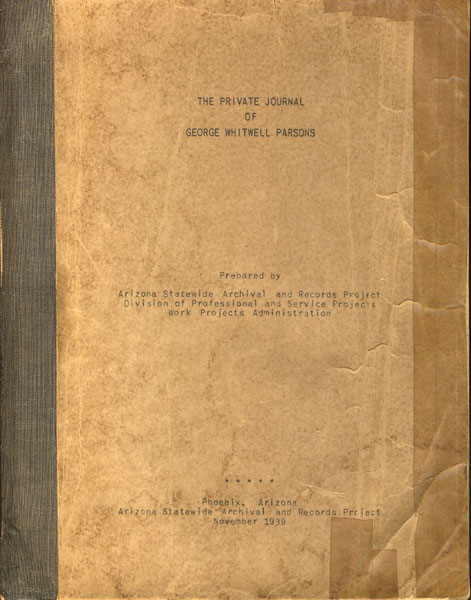 First edition. Quarto. Stiff printed wrappers, vi [1], 333 pp., preface, appendix. All pages photolithographed. Prepared by Arizona Statewide Archival and Records Project Division of Professional and Service Projects, Works Projects Administration. This journal begins April 27, 1879, and ends June 27, 1882. In 1879, "Parsons moved with his friend Milton Clapp to the boomtown of Tombstone, Arizona. He worked as a laborer at first in the mines and later partnered with J. L. Redfern as mining agents. He became acquainted with John Clum, who was mayor. Parsons became a member of the 'Committee of Vigilance' and served on its leadership 'Council of Ten.' He was good friends with Wyatt Earp and John Clum. He knew lawmen Fred White, Virgil Earp, Johnny Behan, and Morgan Earp. He was also acquainted with men on the other side of the law, including Ike Clanton, 'Curly Bill' Brocius, Johnny Ringo and others of note. For the next seven years Parsons would keep daily records of his day, and detailed what happened leading up to, during, and after the Gunfight at the O.K. Corral. His diary gives valuable insight into the personalities and characters involved in those events." Six Guns 1689 says "Rare." "Gives some interesting daily history of Tombstone. The author, very partial to the Earps, tells about the killing of Morgan Earp and Frank Stillwell, as well as many of the troubles the Earps had, including the O K Corral battle." The author said that his version would appear to be in accordance with the facts, being a daily record of events, and he believed, the only record claimed of such a nature in existence. Re-enforced along the fore-edge of the front panel and a few preliminary pages, moderate vertical creases to the front panel, else a very good, tight copy of an extremely difficult title. Housed in a quarter leather and cloth folding case with raised bands and gold stamping on spine. SIX GUNS 1689 "RARE."

The Mccartys, They Rode With Butch Cassidy
E. RICHARD CHURCHILL

Bluebonnets And Cactus, An Album Of Southwestern Paintings …
SALINAS, PORFIRIO [ART BY]